This is Steven Universe at its most surreal.

Steven: No. Have you seen my pants? They’re also very important.

This is another one of those magical mischief episodes, involving gem shards that are somehow attracted to garments and frequently turn them evil.  Unfortunately, Steven misses Pearl’s explanation about that because he’s too concerned about his missing pants (guess where that missing shard is hiding?). 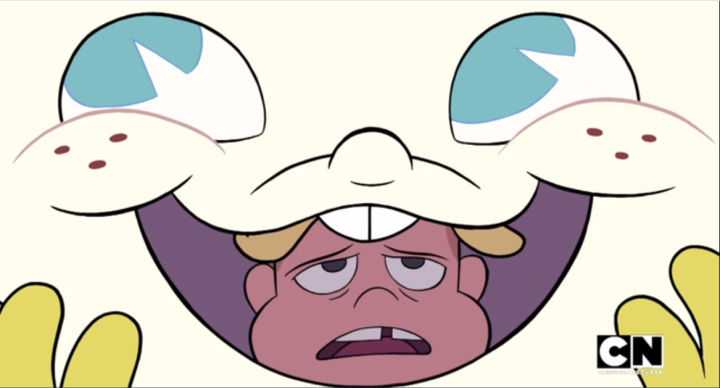 This also happens to be where we establish that no, it’s not just the Crystal Gems – Steven wants to make everyone happy.  And unfortunately he tends to have access to dangerous magical items which may briefly yield the desired results, but rarely end well.

Peedee: I told my dad I wanted to be part of the Fryman family business. I didn’t think it meant being stuck in a sweaty old costume. Things used to be different, Steven. Nothing to worry about then but making myself dizzy on the old seahorse at Funland. […] I wish there were a way for this costume to do its job without me in it!

So of course Steven has the bright idea to stick the magical gem shard in the Frybo suit to get Peedee out of his job for a bit.

Then he promptly runs off and has a little tenth-life crisis.

Peedee: You pick up a job to buy a house, or raise kids, or to…impress your dad. You work away your life and what does it get you?

Peedee: No, you get cash. Cash that can’t buy back what the job takes. Not if you rode every seahorse in the world.

Which brings us to a little fact which Steven will often run into: Giving people what they want (or what say they want) will rarely make them genuinely happy. 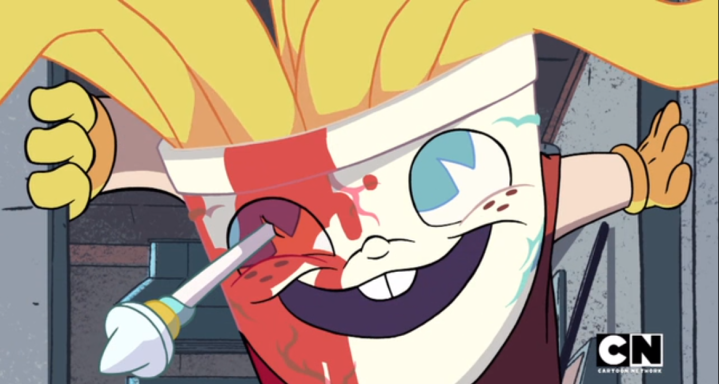 Which leads us back to this thing, which has begun attacking people and forcing fries down their throats.  Yes, it is exactly as scary as it sounds, even if it is composed entirely of french fries and ketchup.

Pearl: Steven! Did you put my missing shard in that fry costume?

Pearl: Didn’t you hear what I said about the living armors and infantries and many, many deaths?

But when Pearl is incapacitated by ketchup, Steven decides to fight fire with fire.

Steven: I didn’t want to do this, but you leave me no choice. Underwear, go!

Yes, he retrieves the gem shard completely naked, having sacrificed his clothing to defend Beach City.  I really have no words.

Steven: Pearl, I think our work here is done.

Pearl: Put on your clothes, Steven.

But those words will do fine.