It should be easy. I know what to do. And I know how to do it. It’s all so simple. I just need to face up to what I’ve been running from. That’s all. But…it’s making me a nervous wreck. I feel sick…and I’m only at the front door. But I decided today’s the day.

Kyo’s doing “something else” – that is, going to talk to his father for the first time in years.  This is gonna hurt. 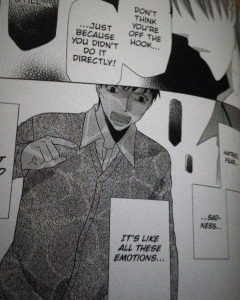 He sets the tone of the conversation by blaming Kyo for “needing” to take time off from work, even though Kyo only just showed up for the first time in years.

Father: Why don’t you admit it already!? Admit that you killed your own mother! Don’t think you’re off the hook just because you didn’t do it directly!

Kyo: (internally) I feel sick. Hatred, fear, sadness…it’s like all these emotions are chucked in a pot and boiled together. Get a grip. (aloud) Yeah. You got me. It’s my fault.

Father: Call the main house! I want them to take him into custody right away! You’ll take responsibility for her murder and never see the light of day again!

Kyo: Now, that I refuse. I’m never setting foot in that room. I’m going to live my life on the “Outside.” That’s that. I just came here to tell you that.

Kyo still blames himself for his mother’s death, but he’s finally realized that doesn’t mean he deserves any of the family-sanctioned abuse allotted to the Cat.  He’s made mistakes, but that doesn’t mean he has no right to live freely. And of course he came to that conclusion thanks to Tohru.

Kyo: (internally) Even though I’m a far cry from “normal”, you’ve never made fun of me for it. You never gave up on me. You did your very best to support me. To care for me, to keep reaching out…you really do mean everything to me. And that’s why…(aloud) There’s somebody I want to be with. From now on…until forever.

Father: Forget it. What are you talking about…? You know they’ll never allow it, right? There’s no way they would let you live a “normal” life…I won’t allow it…! It’s all your fault…! You’re gonna pay for your crimes! You owe me! You’re gonna make it up to me! Do you know how much shame you’ve caused me!? You ruined my life! It’s all because you were born…! You should never have been born! I won’t stand for it! Never! Dammit…the two of you turned me into a disgrace! And I bet you’re happy about it!

And now his father’s blame and resentment of Kyo makes complete sense.  He hated being associated with the social stigma of the Cat, and he managed to blame both Kyo and his mother for that (because like Kyo, he has an issue with blame-shifting).  Then when his wife committed suicide, it was a simple step from blaming Kyo for being born the Cat to saying he was the reason his mother killed herself to simply blaming him for her death.

Kyo: (internally) Were you lonely? Was it hard, bearing all that pain on your own? I was too young back then to really understand. Although it’s not like I can say I would’ve understood if I’d been older. But once you’re dead, you can’t try to change things. You can’t take anything back. Y’know, I just wanted you to live. I can finally think that. But it’s too late now. I didn’t want you to die. I didn’t want you to give up on yourself. If you were just alive, Mom. (aloud) I ain’t gonna give up on myself. I’m done with that. While I’m alive, I’m gonna try to live. To really live.

Then Kyo quite sensibly leaves.  But his dad has already made enough of a fuss to get the attention of the Main House…and an unusually chill Akito.

Akito: There’s something I need to tell Kyo’s father anyway. Kyo is free to go. As for that dark place…I’m going to destroy it.

Head Maid: […] Do you think his father will accept that?

Akito: It doesn’t matter. I’ve made up my mind.

Head Maid: After all this time?…You’ve changed, Akito-san. I liked the past you much better.

Akito: Well, then…feel free to stay stuck there as long as you like. As for me, I should’ve left ages ago.

Methinks this is the combined effect of Tohru and Momiji.  They are a powerful combo.

I’m sure the answer for what to do about my father is also so simple it’s scary, and it’s gonna take an incredibly long time. Got no choice but to do it though. If I’m gonna live…

Meanwhile, Hiro and Kisa are being adorable (as usual). And communicating (as usual)!  Things are slightly awkward now that Kisa’s still cursed but not Hiro, but this is remedied by the aforementioned communication (and adorableness).  Seriously, these two are quickly becoming my favorite couple.

Then they run into Kyo!

Kisa offers him a handkerchief and calls him “Onii-chan”, and it makes Kyo think of Tohru and this is just too cute.  All because of stress vomit!