At last Tohru must face Akito, now that both of their lives are undergoing seismic shifts and their futures are in doubt.

“They’re both dead because of me.”

If that were really true, I would be heartbroken. But when he said that, his eyes shining through his orange hair were speaking much louder. “I’m sad. I’m so sorry. I don’t want this.” The sight of that moved my heart, making me love him even more than I love my mom.

Akito: It’s over. The end has come. Are you abandoning me…? Deserting me in the end…? Are you leaving me behind…?

These two are both falling apart for completely different reasons.

The feeling of being left behind, of being abandoned, is a suffocating loneliness.

Akito: Are you happy now…? You’ve won. You’ve stolen the place where I belong. You’ve turned me into an “outsider.” They all love you best now. Are you happy now…!? Thanks to you, I’m all alone! A waste of space! The bad guy! Are you satisfied!?

Akito finally understands that she can’t stop the Curse from breaking – everything her father told her is vanishing, and her mother’s scorn is filling that void.

Oh. I can finally see it. Akito-san…

Akito: I truly despise you. You destroy somebody’s world, and here you stand, pretending you’re all pure and innocent! You’re the dirtiest one of all…! 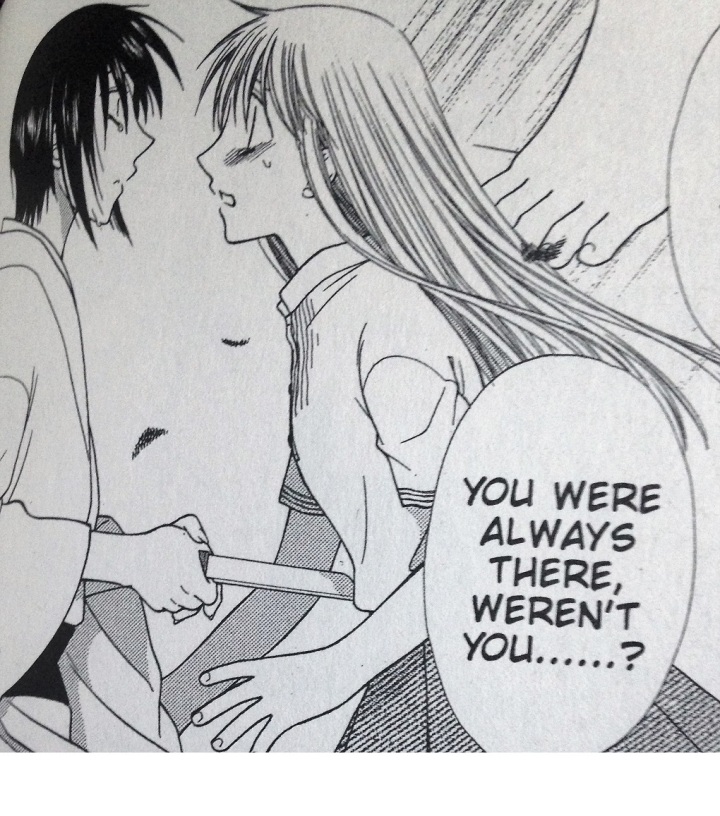 Tohru: This whole time…you were always there, weren’t you…? (internally) I didn’t realize it before. I’ve been so thoughtless…it’s terrible. […] (aloud) Akito-san, you’ve been so lonely…but you kept it hidden. (internally) From the beginning…since birth, you’ve been singled out as being “special.” You were treated as a being who stands above the group, not someone who is a part of it. That’s no different from being left behind. (aloud) “Eternity”, “nothing will ever change”…you kept repeating those words all this time because you were scared…you were so scared, you didn’t know what else to do…

The Members of the Zodiac couldn’t really understand Akito, and everyone else only judged her by her actions.  And that’s basically what loneliness is: Not being physically alone, but mentally isolated, with no one to confide in.

Tohru: I am dirty. Akito-san, you’re right. I denied the “eternity” you were wishing for…but actually, I was wishing for the same thing. For something “eternal”…for feelings that never change…for a bond…

Mom, I’ve fallen in love with someone. If change is part of life, then it’s such a cruel kindness. I was worried about it for so long, and he just told me he’s disillusioned…I’ve scared him off…but still – I love him. Even if these feelings go unfulfilled, I’ve decided. I can’t remain at a standstill anymore. Mom, I’m going to move on.

Relationships can’t last forever.  People change, so their bonds change, too – and that can be scary.

Tohru: Neither people nor feelings can be bound, frozen in time…and I think, Akito-san, you’ve realized that too, haven’t you? That’s why you’ve been so frustrated, so sad, so miserable, and so lonely all this time, isn’t it…?

Akito: No…don’t leave! Don’t leave me behind! Why!? I’m scared! No! I don’t like this! I hate this world! I hate this! It’s not my fault! And it’s too late…even if I realize the truth now, it’s too late…! I can’t survive in a world like this! I don’t want to, not after everything…no “promises”, no “bond”, no “eternity”, living on the “outside”…the very idea terrifies me. I’m scared…I’m so scared! Who will love me? There’s no guarantee! Surrounded by strangers…I can’t live like that. I just can’t…

Change is hard, especially when you’ve been stagnant for so long.  Akito still knows so little. But of course, Tohru counts for quite a lot.

Tohru: Akito-san, why don’t you start with me? Right here. Right now. We got off on the wrong foot. Hello. My name is Tohru Honda. What’s your name? I’d like to be your friend.

Akito: Liar…you say that now, but if I cried, you’d get annoyed right away. If I grumbled, you’d lose your temper. You’d come to hate me…you’d abandon me…

This is a very image-and-dialogue-driven chapter, so I won’t even pretend to apologize for all the images and dialogue.

But then Tohru FALLS OFF A CLIFF, because these two just can’t get off that easily, I suppose.