Prepare to watch your heart shatter into pieces (if it hasn’t already).

Kyo: I’ve got something I’ve been wanting to ask you too, since the other day. Now, if I’ve got the wrong idea, go ahead and laugh at me. Make fun of me as much as you want. Are you…are you in love with me…?

Because poor Kyo just can’t accept the love that’s offered to him.

Kyo: That’s stupid…(internally) I had a bad feeling. Looks like I was right.

Tohru barely speaks a word this whole chapter.  It’s just Kyo giving all the reasons why Tohru shouldn’t love him, why he doesn’t deserve her love.  He’s running away again, but Tohru follows and listens to everything he has to say.

Kyo: I didn’t think you were that stupid. Why…? Didn’t you love your mom more than anyone else? Or was that a lie? Is all that “gone” now? I can’t do this...(internally) I should never have gotten so close to her. Why did I ever wish to be with her in the time I have left? If I’d known this was gonna happen…it’s too much. I don’t wanna tell her. I don’t want her to find out. I don’t want to admit it. But this is too much…

He thought (or perhaps hoped) that he would be “safe” because Tohru would never let anyone replace her mother in her heart – and he would’ve been right, in the beginning.  But Tohru’s finally moving past her loss, and it’s time for Kyo to move on, too.

Kyo: You don’t know anything…! You got no idea what I did! (internally) You think you’re in love with me. I feel bad for you. I feel awful for you. I’m sorry.

Kyo: She didn’t have to die. She really didn’t. Your mother. Your mom…I knew her. And that day…the day of the accident…she was standing right there next to me. I recognized her right away. (internally) […] Everything about her was the same as I remembered. A long time ago, right after Master took me in, I wasn’t comfortable enough to go back to his place right after school. So I started wandering around on my way home. That’s how I met her. 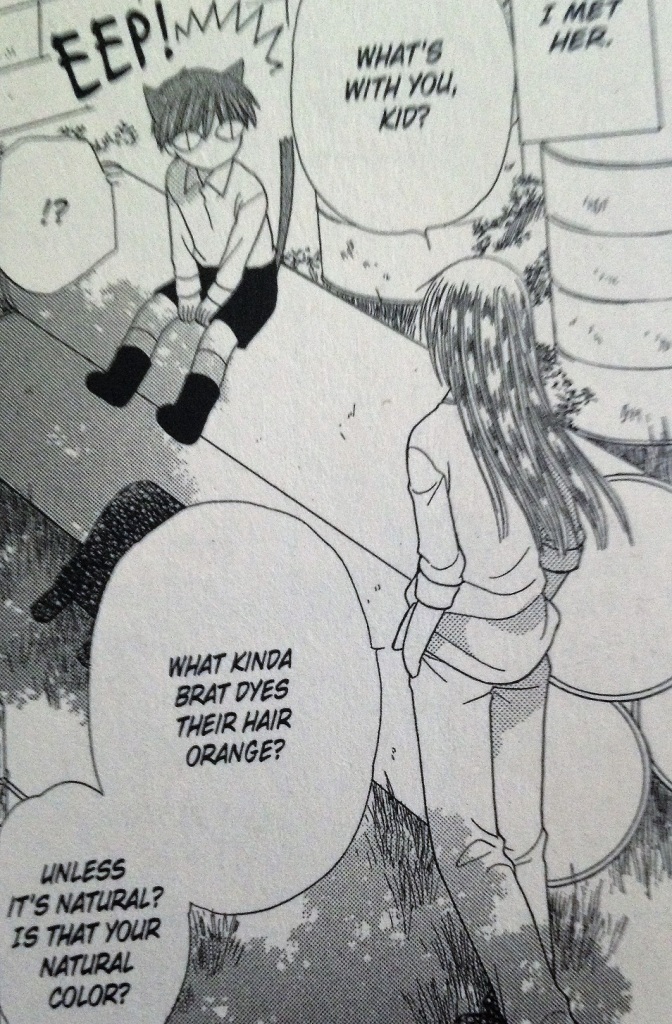 Kyoko: The brat’s a little snot-nosed punk! How cute!

Kyo: Who are you calling cute, you old hag!?

Kyoko: Man, the mouth on this kid! Adorable! You’re so cute, everyone’s gonna want you for themselves. So you better get on home before someone kidnaps you! I’m sure your mom’s worried too –

Kyoko: Then your dad…

Kyo: I got no use for him! He can drop dead too, for all I care! After all, he thinks I’d be better off dead too!

Kyoko offered him understanding, but also a little perspective.  Little Kyo never actually told Kyoko his name because he just had an inexplicable hangup about having similar names, so she just dubbed him “kiddo”.  They had all their little chats about life and love…and then one day Tohru didn’t come home from school.

Kyoko: I’ve been looking for her, but she’s not here! She’s not anywhere! I can’t find her…!

Kyo: Don’t worry! I’ll…I’ll find her! I promise…! So you just wait here at home! I’ll help her for sure! I swear I’ll protect her! That’s a man’s promise!

But of course, he failed. Yuki stepped in to save the day instead.

Kyo: He’s a bad guy…that guy’s got everything you could ask for. He gets treated like royalty, and he still takes things from other people…!

Kyoko: But he saved Tohru?

Kyo: He’s still a bad guy! He’s rotten! I was gonna be the one to find her!

Kyoko: That’s just how you want him to be, right? If you didn’t have a “bad guy” to blame for everything, you wouldn’t know what to do with yourself, huh?

Kyoko: Nope. “Sides,” “good guy,” “bad guy,” it’s all nonsense. It would be a waste if you lived your life fixating on that crap. Especially when you’re such a kind, sweet boy.

Kyo: You’re not making sense…you traitor! You can…all of you can go to hell!

Kyoko: Kiddo! I’ll take a rain check on that “promise”!

His child ego was wounded, and she was calling his entire worldview into question.  So he stopped seeing her, but he couldn’t forget her.

Kyo: (internally) The next time I saw her was that day. (aloud) I wasn’t sure if I should say something. And then I saw a car going way too fast. It was heading right for your mom. I could tell. She was in danger, and I had to save her. I just needed to grab her arm and pull her back – but I’m not “human.” So if I’d caught her in my arms, I would’ve turned into a cat, because I’m not “human.” And everyone would’ve known. I let her die.

If I’d just pulled her back into my arms, she wouldn’t have been hit with such force she went flying. She wouldn’t have gone through all that pain. She definitely wouldn’t have died…! In that moment, it was either “myself” or your mom’s “life”, and I chose myself. I protected myself over her life. Her life…! Even though…(internally) Even though I hate myself. I hate myself so much that I think I should die, that I should disappear, and yet, in the end, I always protect myself. I indulge myself, and run away. Always…always…always…even now, I’m so scared, I can’t even look you in the eye.

No wonder he can’t accept that Tohru loves him – he can’t even forgive himself.

Kyo: My mom too…she got flung through the air when she died. But not from a car. She was apologizing to my old man for giving birth to me. She said she felt sorry for me, that she couldn’t bear even being around me. She bawled all night, and the next day, she died. 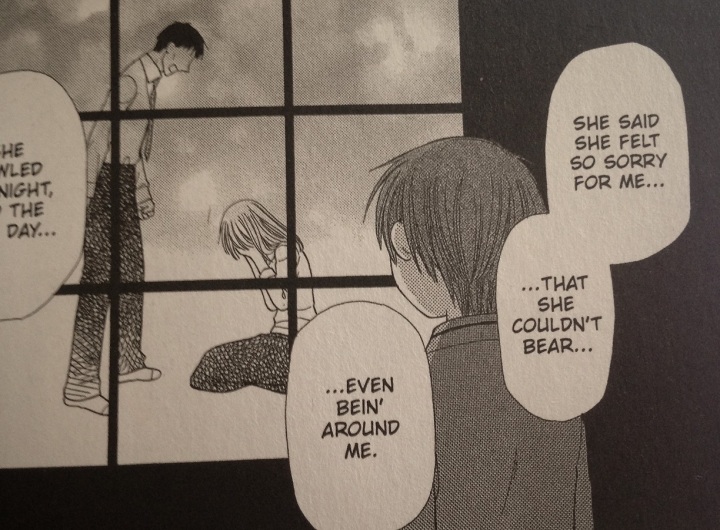 I know I’m not adding much, but this is basically just Kyo expressing his feelings, and there’s not much for me to add.  I guess it’s communication, so…that’s good?  But my feelings are really more like “This poor kid is long overdue for a hug.”

Stop lying. Come on. Admit it. You know the truth. Isn’t that why you ran away? So come on. Just admit it! 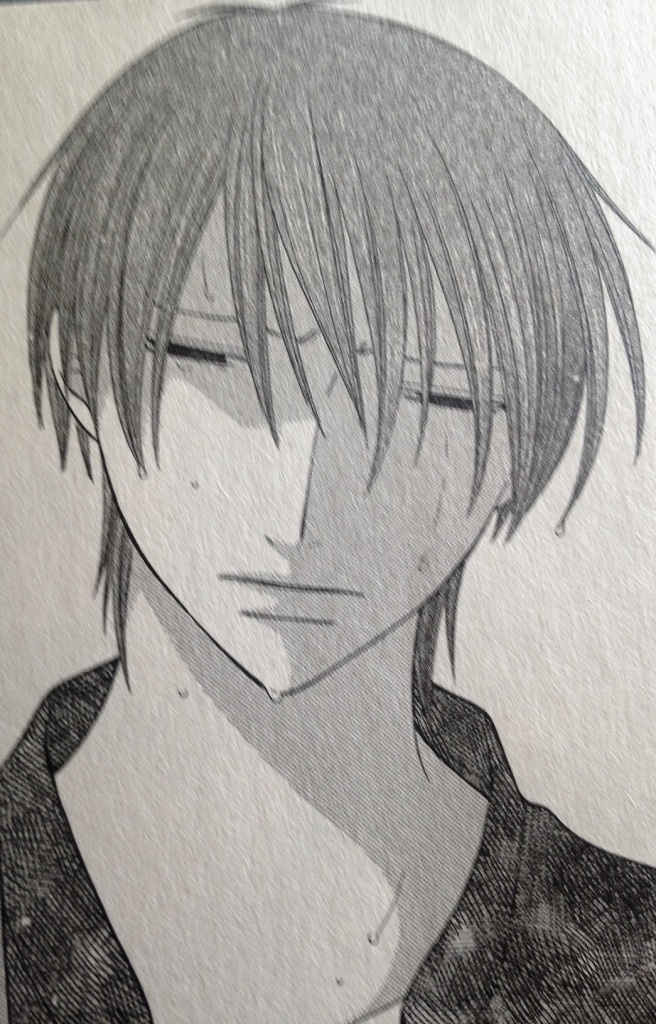 Kyo: Everything…it’s all my fault. I stole their lives. I did that. They are both dead because of me.