The Curse continues to fall apart, and Akito is nowhere near ready to let it go. 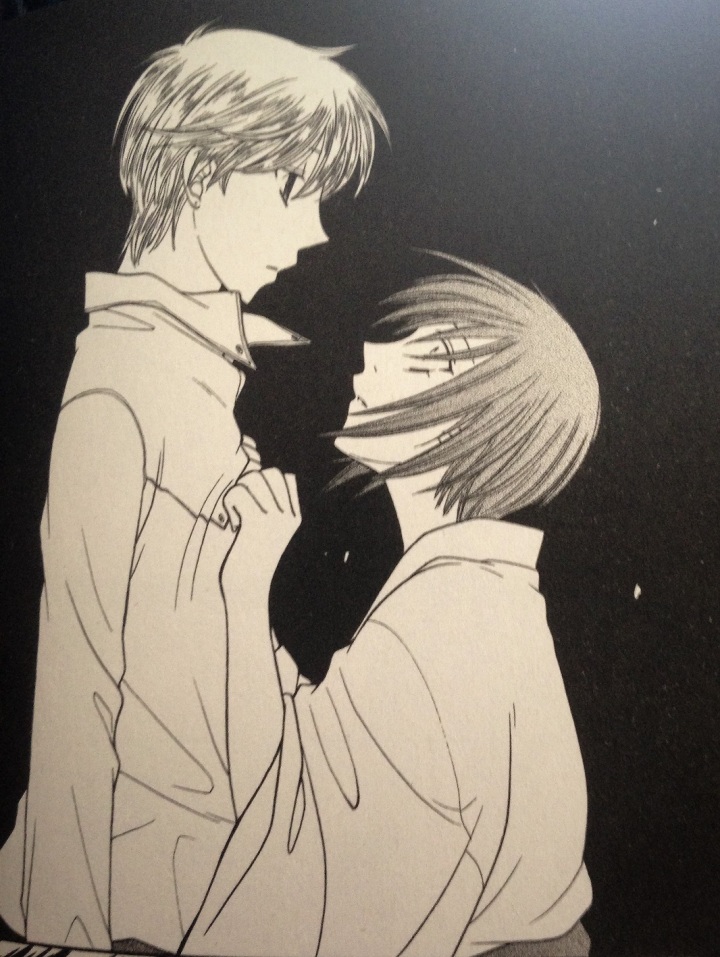 What were they? Those feelings that were standing watch at the edges of my mind…what were they? What exactly had been keeping me bound to this person for so long? This small, weak, pathetic person.

Akito has no more power over Momiji.  Again, there’s no obvious answer as to why his curse broke now, but there are definitely some hints.

Momiji: You should go back to your room. You’re not well, remember? Don’t worry. I won’t tell anyone. Go away for tonight. Right now, I’m a little confused too. I’ll come by tomorrow. We can talk then. (internally) That’s a lie. That’s such a lie. The truth is, I already understand everything.

It almost does seem cold for Momiji to shut Akito out like that, but it’s only reasonable for him to want a little time and space to process this seismic shift in his life.

The next day at school, Haru notices something off about him (and not just that he’s late for some reason).

Momiji is keeping his distance from the others…and then he runs into Kyo.

Kyo: Is there something different? About you?

Momiji: My curse broke…just kidding. Did I fool you for a second there? But who cares if my curse breaks? Tohru would be happier if your curse broke. I’m sure she’d be thrilled. After all…well, you know, right? I won’t lie, that’s a bit frustrating for me.

Kyo: …Shut up. Shut your damn mouth. I don’t wanna know anything about that! It all sucks. 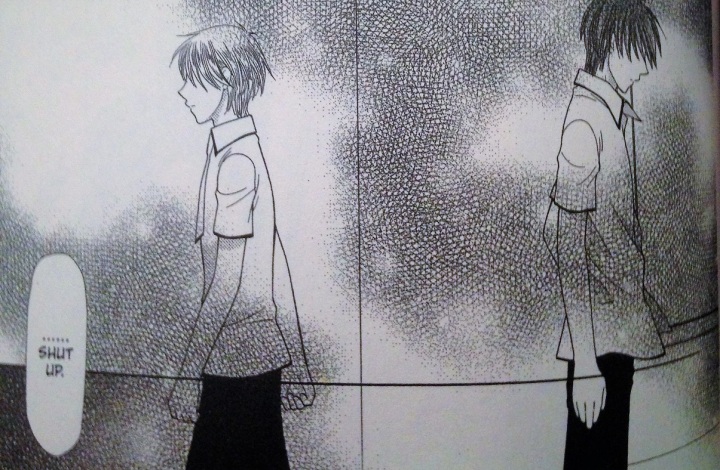 Momiji has been a lot more honest with Kyo lately, which probably has to do with his feelings for Tohru.  He knows butting into their relationship would turn out badly for all three of them, so he’s just trying to egg on Kyo in whatever way he can.  I think for a while Momiji thought he might have a shot at Tohru’s heart, but by the time he’d “grown up”, he could see that she was already deeply in love with Kyo (even if she couldn’t).

Momiji’s curse broke at a point when his love for Tohru was unbearably strong, and when Akito seemed to be dreaming of her father – when both of them were immersed in love for someone else.  So yeah, I buy Kazuma’s theory that the bonds of the Curse are broken when stronger bonds are forged. While it’s hard to say who Kureno may have bonded with way back when his Curse broke, I think it’s safe to say that Akito was feeling strongly about her father back then, too.

Momiji: I’ve had a lot to think about today. Like wondering why the Curse only broke for me, and what caused it. I didn’t reach any answers, but the one thing I can say is this – Akito, I can’t spend the rest of my life at your side. I can’t do it. Not anymore. The bonds that were keeping me tied to you are –

Momiji: I know all that. I’ve never been this free before, but I’ve never been this lonely before either. My curse broke, but I still can’t be with the person I love most. And now the bond that connected me unconditionally to everyone else is gone. But now that it’s broken, I can’t just go back to the way things were before. Still…but still…you can’t say I’ll never be happy just because I don’t have those things. You don’t have the right to decide that for me. My newfound freedom does make me lonely, but my happiness may be waiting for me just down the road. I’m finally going to start walking down a path of my own choosing…how about you? How long are you going to stay here? The one who won’t have a place to come back to, who’d never be happy, the one who’s most afraid of that is…

Akito: Shut up. I don’t want to hear it. Get out of my sight.

See, Shigure? It is possible to talk sensibly with Akito, even when she doesn’t want to hear it. For real, though, he seems to be under the impression that there are only two ways to deal with problem children: Being “nice” and ignoring their flaws or being critical and totally unsupportive.  It is possible to provide constructive feedback AND support!

Mama: Momiji-kun, right? Good morning. Is this your usual route to school?

Momiji: No. I thought I’d take a different path today.

Mama: Oh, really?…You’ve grown into a fine young man, Momiji-kun. I didn’t recognize you at first. […] During summer vacation our family is going on a trip, but [Momo’s] already so excited that she can hardly contain herself! How about you, Momiji-kun? Are you going somewhere with your family over the summer?

Momiji: (internally) It’s a place I can’t reach. A place without me…the “happiness” built on my absence…(aloud) Yeah. I will be going on a trip…(internally) One day. With the family that I’ll make for myself.

Momiji’s a sensible kid.  I fully believe he can create a fantastic life for himself, even if it isn’t quite the one he envisioned.  Life is full of changing expectations like that. Maybe he can become a violinist now! The future’s wide open for him, as scary as that might be.

Next time: The fallout for Akito…