Yuki and Machi continue to grow closer (and more adorable). 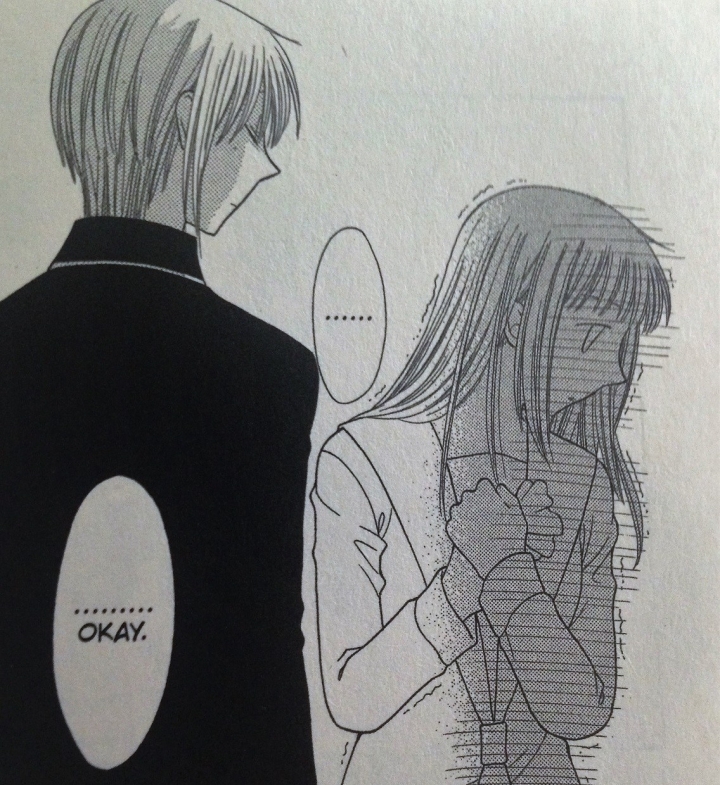 He got Machi a Mogeta paperweight because he noticed her admiring Aaya’s giant (plush?) version of the character in the midst of her torment at his brother’s hands the other chapter.  As an apology for said ordeal.

Yuki: I’m sorry…they didn’t mean you any harm. They just live in a slightly skewed reality…

Then Kimi gets all miffed at Yuki for giving a present to Machi and not her, ultimately resulting in her backstory. 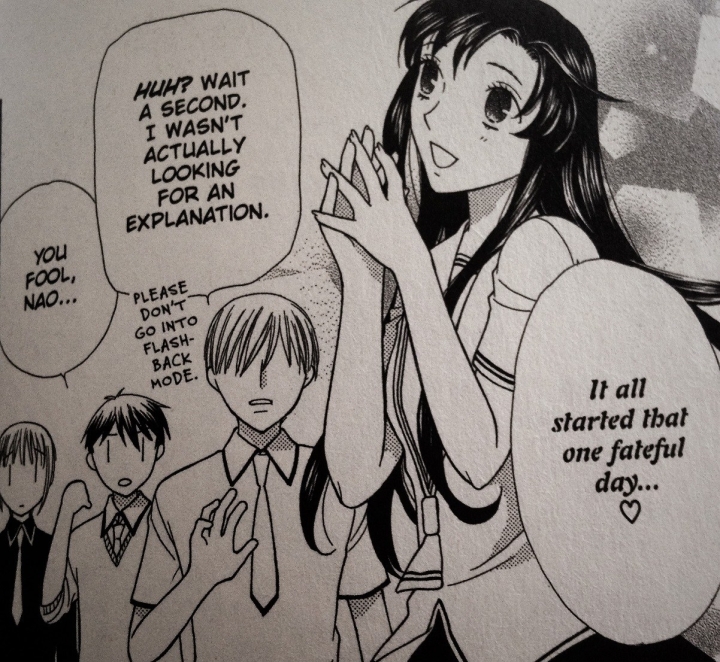 In sixth grade, some girl tried to mock Kimi for her popularity with the opposite sex.

You’re lucky you’ve got a cute face. If you have that, boys are willing to overlook anything! With a face like that, you’ll probably be able to coast through life! 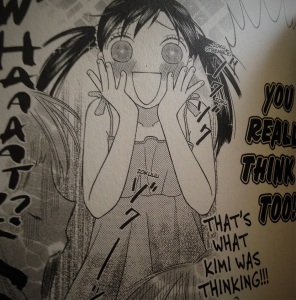 That poor girl created a monster. 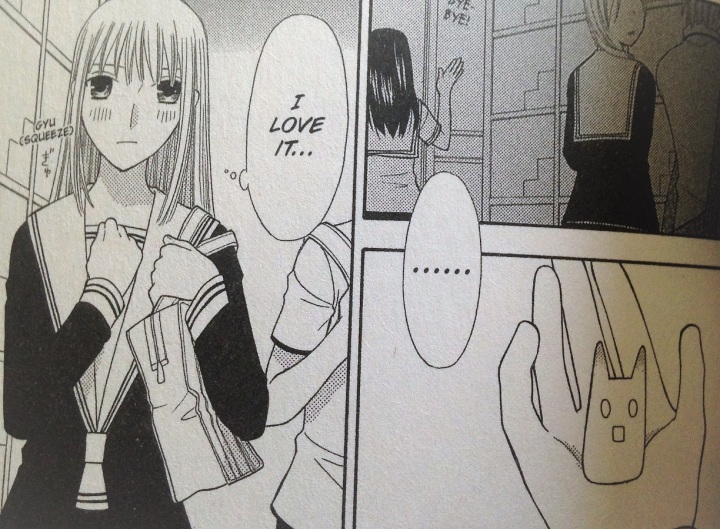 Manabe: No, nothing like that. It’s just…change isn’t a bad thing, is it? […] (internally) I thought I’d never be free of this twisted hatred eating away inside of me. I’d even considered it a “righteous” feeling.

And then Tohru suddenly remembers where she’d run into Manabe before – or more importantly, when: shortly after the Accident. 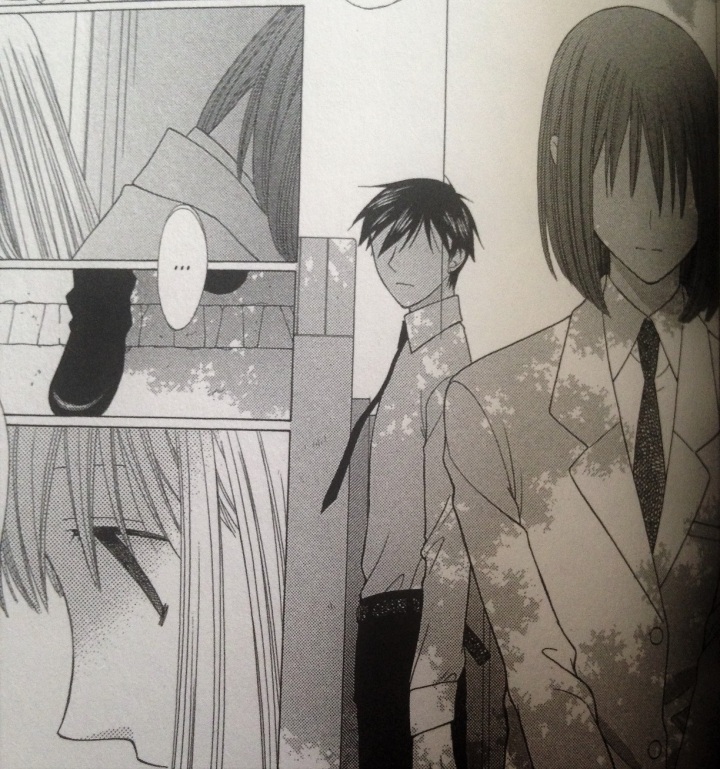 Manabe: You make me sick. Don’t think you’re the only one who’s grieving. Don’t get the wrong idea and think you deserve all the pity!

So his interest in Tohru was something like hatred or anger, at least in the beginning – but he’s grown up since we first met him. 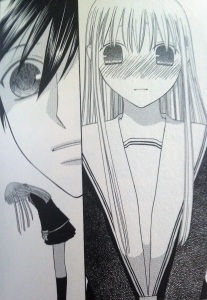 Although he still doesn’t deserve any apologies from Tohru.

Meanwhile, Machi is thanking Yuki for his apology gift in typical Machi fashion (and Yuki’s responding in typical Yuki fashion). 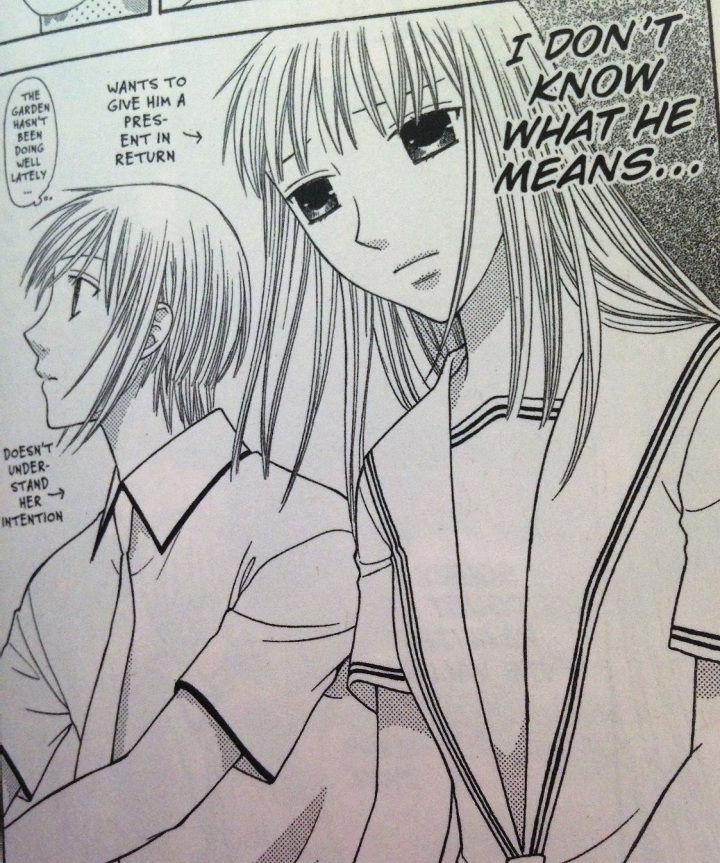 Machi: Is it tough studying for university entrance exams?

Machi: …? You are going to college, right?

Yuki: Yeah, sure, but it’ll be a piece of cake.

Machi: Do you even realize how arrogant that sounds?

Yet another area where I can totally relate to Yuki.

Then he runs into Manabe and Tohru, and the truth comes out. 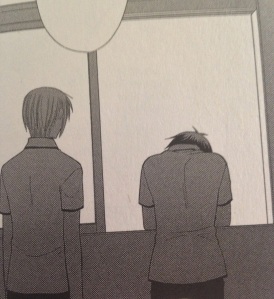 Manabe: There was a time when Honda-san smiling or not remembering me would’ve ticked me off something major. But [my girlfriend] Komaki always smiles for me, y’know? So getting angry at Honda-san for doing the same…well, that’s not really fair, is it? You know…you know Honda-san’s mother was in a traffic accident, right? Komaki’s dad was driving the car that hit her. Her dad was killed instantly…it’s a sad connection to have.

So when he first met Tohru, he was angry that she could act so sad when his girlfriend was grieving, too.  He wanted somebody to hate, and maybe he even blamed her and her mother on some level. But he’s finally started to learn how to be happy for other people’s happiness instead of resenting it.