As Kyo and Tohru continue to be adorably and frustratingly dense, Yuki abandons that awkwardness only to be drawn into Ayame’s special brand of awkward.

Yuki: I felt like a son standing between his mother and her new boyfriend. But was it just me? Are they that oblivious!? Talk about painful…! I don’t care if they think I ran away…I’ll take being lonely over third-wheel awkwardness any day…

Then his thoughts are interrupted by a woman who mistakes him for Ayame.  One thing leads to another, leading ultimately to Aaya in a dress (as all roads tend to do).

I hope we’ll be able to better understand each other someday.

Meanwhile, Kyo and Tohru are still adorable and clueless trying to figure out what they should do with their vacation time.  They decide to go out to the grocery store (because poor Tohru can’t think of anything “fun” on the spot).

Tohru: I’m happy…I’m happy just being able to go out with you. 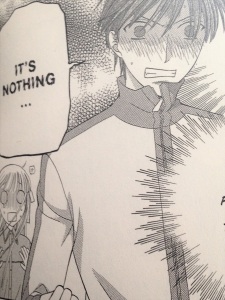 What about you!? Are you gonna be okay, being that cute!? Am I a dirty old man just for thinking that!? Am I the same as some dirty old man!?

Saki: Uh-oh…what’s this…? I sense that Kyo Sohma has turned into a dirty old man who’s lusting after Tohru-kun…

Arisa: Don’t worry. That guy can’t lay a finger on her. He’s lightyears away from making a move like that.

Megumi: Should we put a curse on him, just to be safe…?

Tohru has wonderful BFFs. And a wonderful pathetic Kyo-kun.

After Ayame’s signature much ado about nothing, he finally lets Yuki explain why he wanted to talk in the first place.  Apparently, the woman knew Ayame in high school, and they were both Student Council Presidents (at different schools, of course).  Aaya evidently remembers her, and his first impulse is to apologize to her (which Yuki promptly dismisses, as neither of them has a clue where she lives or anything).

Ayame: Once upon a time, there was a gorgeous Student Council President with flowing white hair. This President had such a regal bearing that he couldn’t hide his bountiful charisma. Many students were fascinated by and attracted to him. The President wasn’t surprised by any of this. He’d experienced it all his life. Around that time, many events were held to deepen the friendship with their sister school, an all-girls school. Naturally, he often worked hand in hand with the President of that school’s student council. However, he was completely oblivious to the fact that this girl had special feelings for him. But it wasn’t only her feelings. He couldn’t comprehend the feelings of anyone else either. Nor did he make an attempt back then.

Ayame: Well, thanks! Good luck and everything after graduation. Well, shall we go forth, Tori-san, Gure-san? Oh, that’s right. One more thing…what’s your name again? I don’t mind remembering. It’ll be like a memento!

Ayame: Did you? Oops! It must’ve gone in one ear and out the other, huh? Could it be that you have so little personality that you failed to make any impression whatsoever on me?

Shigure: Heh. It’s like sumo wrestling with no opponent…

Ayame: I see. Well said, Gure-san! It does seem like she’s been in a sumo match all by herself. But there’s no cause for concern. As long as this experience has made you realize your flaws, you know what to work on –

Hatori: Quit it already. You’ve had enough fun, haven’t you?

Ayame: …What was that about? Why was she crying?

Hatori: …Because you hurt her feelings, obviously.

Hatori: It’s not about whether it’s your fault or not. The point is, some people get hurt like that. Some people are like that.

It’s really interesting to see their dynamic in high school, particularly because so little has actually changed about it. Shigure still loves to mock everyone around him, and Hatori still struggles to bring a little kindness and sanity to the party.  Ayame is the one who’s really changed the most. Even after Ayame was made to understand that the girl was hurt, his first impulse was to make it about himself, what he had done, not how the girl must feel about the situation.

Yuki: Did you finally realize that thanks to Mine-san?…She’s your girlfriend, isn’t she?

Ayame: …I don’t believe I ever stated that.

Yuki: You didn’t have to. I could tell somehow.

Ayame: Indeed. That young woman…she appeared before me one day out of the blue. We began working together…just being around her made me want to smile.

(remembering) I have no proof that I can bring you happiness. But if I told you that I loved you, would you disappear on me?

Mine: What makes me “happy” is something I’ll decide for myself. And I’m not going anywhere. I’m madly in love with you, Boss, so I want to stay here forever. That is, if you don’t mind…?

Ayame: What a relief…I was so terrified that you might reject me…(internally) Oh. I see now. So that’s how people get hurt. If you’re looking for someone special, and that person tramples on you…now I understand.

Mine: Are you sad? 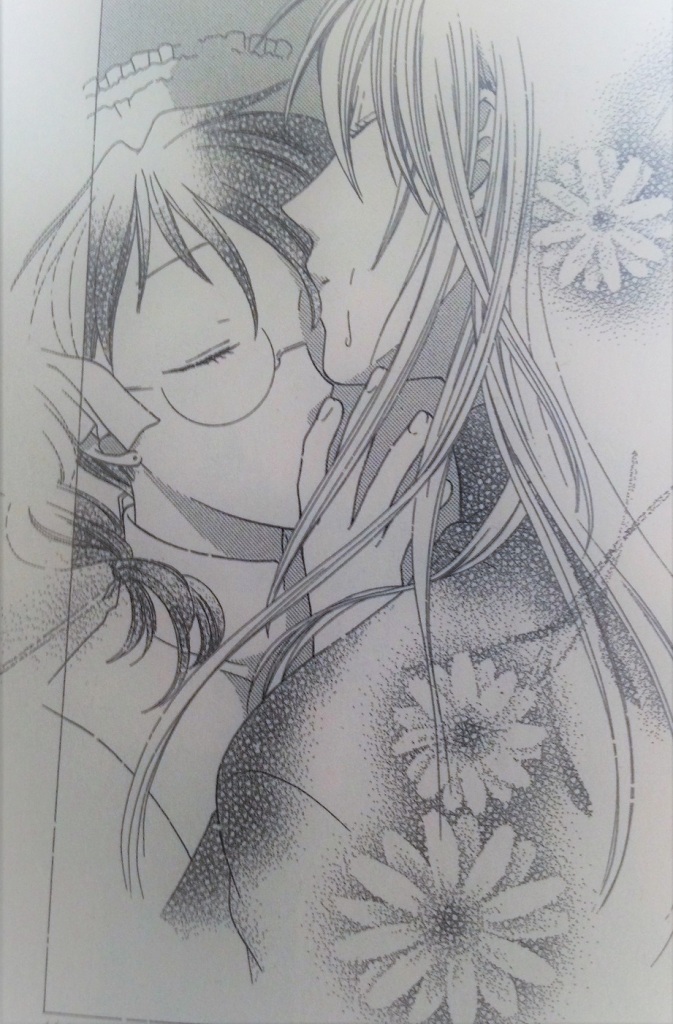 These two are easily the healthiest couple in the Zodiac.  They love each other, are emotionally honest with each other, and generally really supportive.  And as I’ve gotten older, I’ve come to love them for that. I honestly wonder if he pretends to be gay to distract Akito (and more importantly Shigure) from suspecting Mine.  At any rate, this is the only romance in the entire series that never suffers a serious disaster.

Ayame: If only I’d been able to apologize…Is it too late for recompense!? Have I perhaps traumatized her for life!? Do I appear in her dreams every night to torture her!? Oh, how miserable!

Yuki: Listen. It wasn’t like that. She didn’t seem angry or sad. She laughed like she was kind of embarrassed. And I think her husband and child were behind her. You can’t assume she stayed unhappy forever. Maybe she is still scarred by your cruelty. But I imagine she’s been through worse since then, as well as had some great things happen. The way she smiled today made me think she’s a strong person who probably does her best every single day.

Ayame: Hold on. By that logic, I needn’t apologize to you either?

Yuki: Huh? Apologize to me? For what? Driving me crazy?

More often than not, the things you beat yourself up about are actually pretty trivial in the grand scheme of things, and given time everyone else will forgive or forget altogether.  It’s not that Yuki’s forgotten how Aaya abandoned him in his time of need, but he doesn’t let it get in the way of their current relationship, because he knows his brother has grown up since then.

Yuki: Hey, about Mine-san…I guess you have your reasons for not wanting to go public with your relationship, but…does she know you’re possessed by an animal spirit?

Aaya abruptly changes the subject and generally refuses to give any sort of response, although Mine does return to the shop mere moments later, so I honestly don’t have a clue if it’s because he hasn’t told her yet or she just found out in a really embarrassing way. 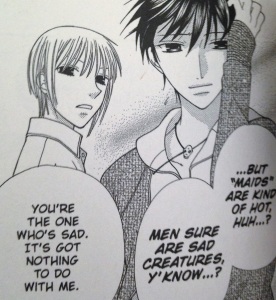 And look who followed her home…And brings up Machi. Poor Yuki doesn’t stand a chance. 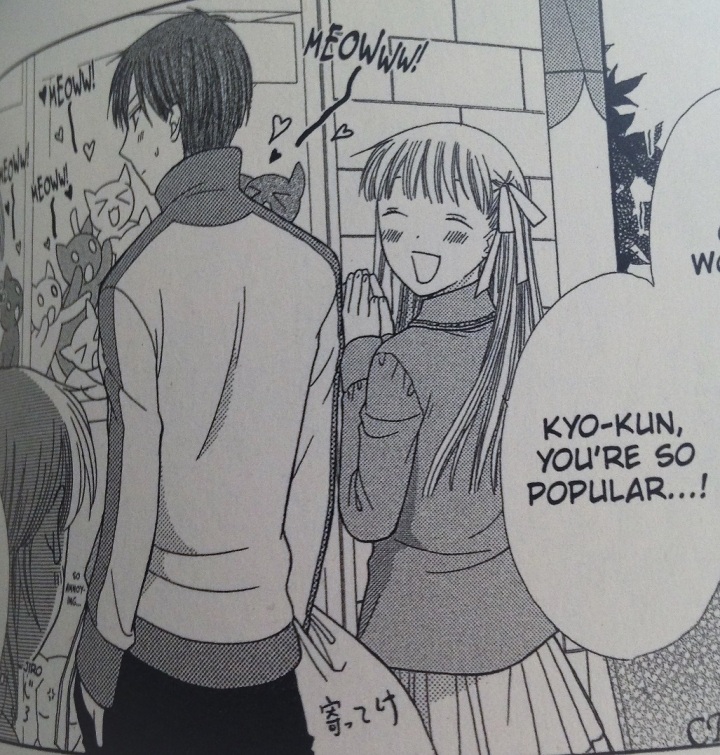 Looks like Tohru came up with something fun to do after all!