Even though spring is almost here, it’s snowing. I hate when the snow piles up. The white snow that smooths over everything. The “perfection” of that white expanse…I hate it.

We return to Student Council Shenanigans (AKA Yuki Is Trying To Figure Machi Out) as Machi’s classmates inform them of yet another destructive incident.  It’s just a box of chalk this time, but they also bring up some gossip about Machi that’s been making the rounds.

Classmate: You know what I heard? She was kicked out of her house for trying to kill her little brother! […] That’s the rumor that’s been going around lately, I’m pretty sure it’s true…

Machi runs off, which the girls take as confirmation of the rumor. 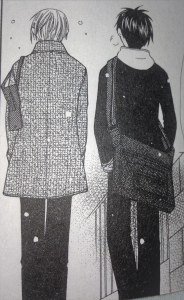 Manabe: What those girls were talking about is actually not that far from the truth. Machi has a little brother. That’ll make him my half brother. He’s way younger than we are. In the end, it was decided that he’d be the family heir. But apparently that made Machi jealous – so much that she tried to murder him. They couldn’t let that dangerous situation continue, so Machi was sent packing. She lives on her own now. Sounds kind of hard to believe, honestly. Although, that’s just the story I heard from my parents, so who knows, man? Wanna ask Machi what really went down?

Manabe convinces Yuki to visit Machi’s apartment with him, and also mentions another strange incident.

Manabe: I was wondering what she was up to, so I watched her. She was marching around, making footprints in the snow like her life depended on it. Walking around and around without saying a word. I still wonder what that was all about.

Machi is understandably embarrassed for Yuki to see her mess of an apartment (and her dirty-minded brother sure doesn’t help matters).  My personal space often ends up in a similarly messy state when I’m left to my own devices (especially when I don’t have company), so I can kind of relate.

Machi: You came here to ask about what my classmates were saying? Believe what you want. You can believe them or not. (internally) I don’t care. No one, not even my parents, believes me. There’s nothing I can do or say now to change anyone’s mind. So I don’t care anymore.

Don’t make excuses. You’ve always been jealous of him, haven’t you? I’ve suspected as much for a while now. I think we should live apart from now on. It’s for your own good. That’s right. It’s for your sake. You’ll be more comfortable living alone, won’t you?

Yuki: Machi, does it bother you when things are in order? Snowy streets, clean rooms, things that are “perfect” like that…do you hate them?

Machi: …Y-yes…they…scare me…(internally) “You must be perfect. Perfect at all times. A perfect personality, a perfect academic record…otherwise you’ll never be able to beat that woman’s son. Your own father will reject you.” I was always so nervous. I’d be punished for anything short of perfection. I was already walking a tightrope, but it just kept getting thinner and thinner. (aloud) It feels like I’m under siege. It feels like I’m suffocating. Even so, there were times when I was desperate to live up to her expectations. But now there’s my little brother, so I…

Mother: Thank goodness. I finally got the boy I always wanted. I can’t tell you how relieved I am. To be honest, Machi is a little too…you know. I mean, she just doesn’t have any personality. She’s such a boring child! Everything about her is average. There’s nothing that stands out. Good grades alone won’t win you any awards in life. 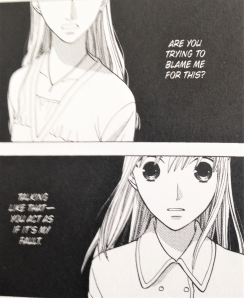 Mother: Are you trying to blame me for this? Talking like that – you act as if it’s my fault…well. Maybe I am a little to blame. Maybe I made a mistake somewhere in raising you.

She was raised to believe that “perfection” was necessary in order to be accepted, even to be loved.  Then it turned out that perfection wasn’t good enough, and Machi was left to try to sort things out on her own – still lacking love and acceptance from her family.  Her mother is the queen of mixed signals, because she never really wanted Machi to be “perfect”, just for her to be chosen as heir (and she thought “perfection” would be a requirement).  But Machi can’t let go of that perfectionism she’s been raised in nearly as easily as her mother can change the requirement. 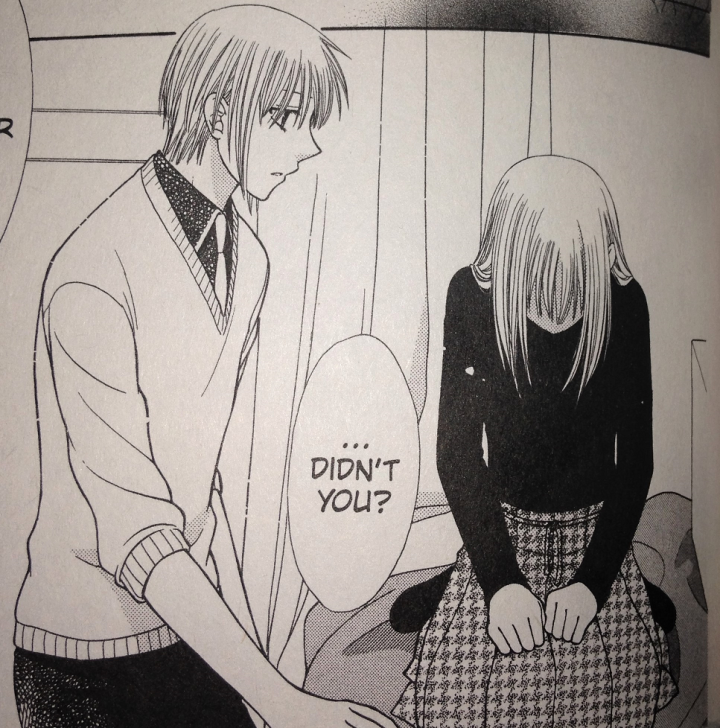 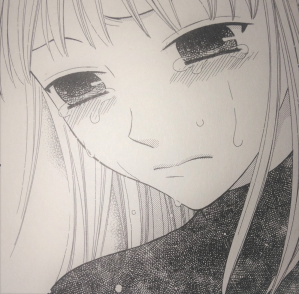 Machi: I…I just thought…he might…be cold. I was worried he’d catch a cold, so I was just going to cover my sleeping baby brother with a blanket…that’s all. I wouldn’t have done…that. But they’d already made up their minds about my feelings, so they wouldn’t listen to me. Even though I was never jealous…not even a little bit! 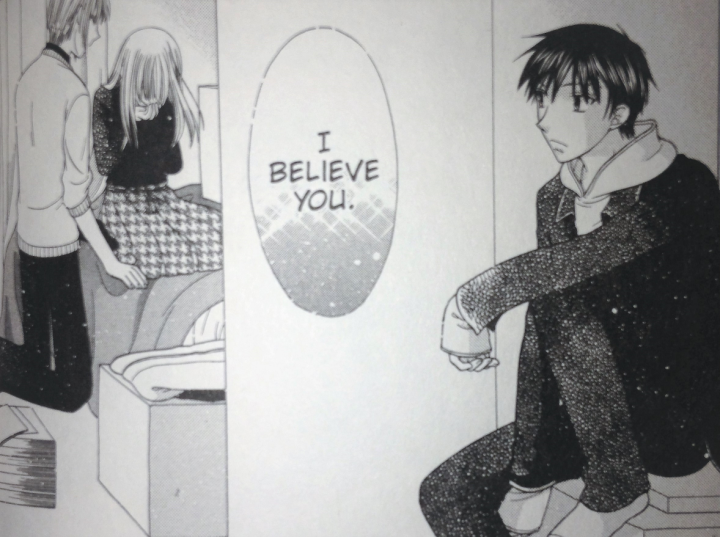 Yuki: Yeah…I believe you. Hey. If the snow keeps piling up like this, how about we go make footprints in the snow together? It’s a promise.

Machi is definitely dealing with a ton of anxiety (social and otherwise), and even if there’s some label one could give to her particular neuroses, that anxiety is obviously the root of her destructive tendencies.  Once upon a time, I actually tried to discount her as “unfit for Prince Yuki” because of her mental issues, but even aside from the fact that basically every character in this series has some sort of mental issue, I know very few people in real life that haven’t struggled with mental illness of some kind. 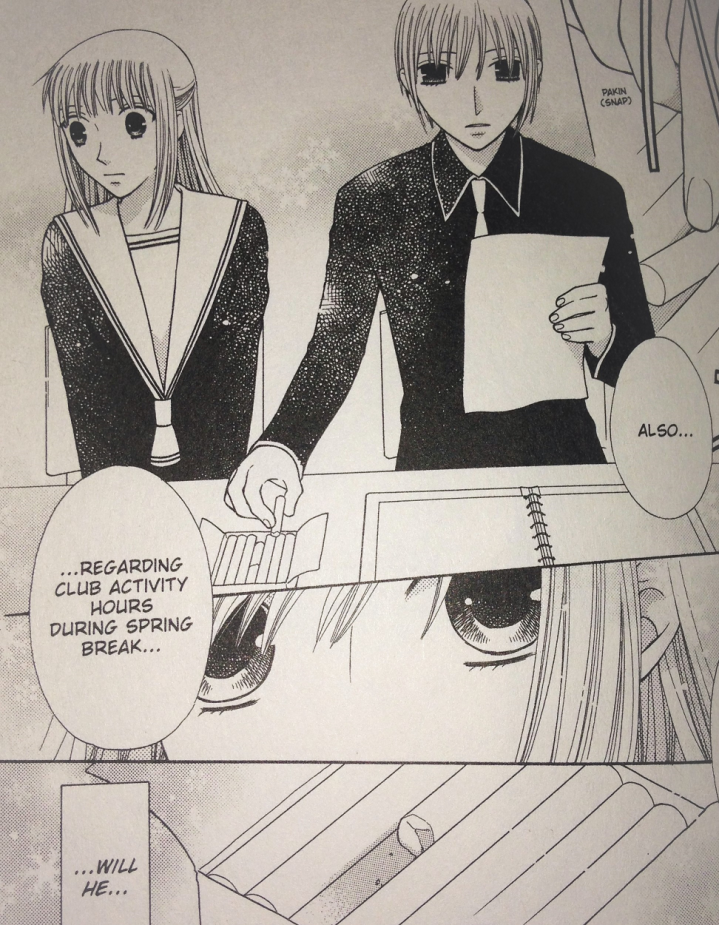 The snow didn’t stay; in the space of one night, it all melted away. Will he remember his promise the next time it snows? Will he go for a walk with me? I wish it would fall soon. For the first time in my life, I find myself hoping for snow.