Yuki begins to confront his past in his efforts to move forward – and Akito doesn’t like it.

But first, we find Tohru and Kyo staying at Master-san’s house. It’s New Years again, and this time Yuki chose to actually attend the banquet.

Yuki: Well, I don’t know how I feel about leaving just these two [Tohru and Kyo] alone in the house [for several days]…

Hence the housing arrangements. Kyo is slightly conflicted (because he’s slightly conflicted about Tohru in general at this point), but I think it’s safe to assume they’ll have a happy New Year. But it turns out those two aren’t Kazuma’s only houseguests for the holiday. 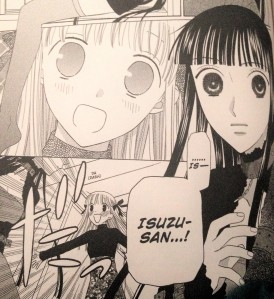 Kyo: Tohru, think before you fling yourself at somebody…

Not everyone is as enthusiastic about hugging as Kisa or Momiji!

Tohru: When I went to visit Isuzu-san at the hospital the other day, she didn’t mention anything.

Kazuma: Yes…it seems she’s only out temporarily. However, she didn’t want to participate in the banquet, apparently, and wasn’t sure where to go instead, so I invited her here. If she taxes herself now and ruins her health again, she’ll lose any progress she’s made.

Meanwhile at the banquet, Hatori and Momiji had their little dance, much to Hatori’s embarrassment and Shigure’s sadistic enjoyment.

Hatori: You’re exasperating. Now you’d better get back in there before Akito gets lonely.

Shigure: What is that, sarcasm? Akito’s got Kureno-kun and Yuki-kun on either side. I’m not hearing any complaints.

Hatori: …It may be hard for Yuki.

Shigure: Come on, you worry too much…ah. I get it. You feel like you owe Yuki, hence the excessive worry. That it?

Hatori: Well, I don’t owe you anything, and I certainly don’t worry, so you can rest easy.

I don’t blame you, Hatori. Shigure could use a little more discomfort.

Kureno is off in some corner (evidently in Akito’s sight), while Yuki is left to actually converse with Akito. 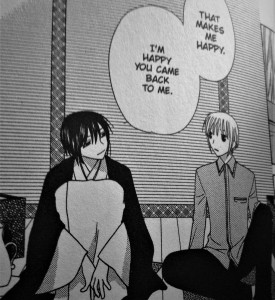 Akito: This time, you didn’t run away. That makes me happy. I’m happy you came back to me. And that’s why I forgive you. But I want you to visit me more often.

Yuki: …I forgive you too, Akito.

Yuki, I know you mean well, but you have to know you’ve got something coming for that.

Yuki: …Or no. It isn’t about forgiveness…I’m tired of blaming other people. (internally) I’m tired of blaming Akito, my mother, or Kyo when things don’t go my way. (aloud) I need to wake up to the fact that I have a lot of bad points and things I need to work on. Otherwise I’ll always be a fool. I’ll never be able to change if I keep blaming other people.

While there’s definitely merit in refraining from blaming your problems on other people, forgiveness plays an important part, too. Especially in situations of abuse like Yuki’s, it’s necessary to forgive the hurt they’ve inflicted before you can truly move on with your life and beyond the influence of the abuser.

Akito: What is that…look…(internally) in your eyes? No…don’t go!

This is our first real glimpse into Akito’s mind – not what he expresses to others, but how he actually feels. And what he feels is fear.

On a different note, this is another little callback to the anime. Takaya-sensei never actually shows how Akito hurt Hatori’s eye back in Chapter 12 – the thing with the vase was entirely a fabrication of the anime. It’s not necessarily significant, but keep an eye out for a few more callbacks in the near future.

Akito’s power over Yuki is already breaking, and Akito knows it.

Hatori: Don’t thank me. I apologize for not intervening.

Yuki: That’s all right. It probably just would have enraged Akito even more.

Hatori: What did you say to Akito?

Yuki: Nothing special…just that I’m tired of blaming other people…ah. I need to apologize to you too, Hatori, for what happened when I was a child. Somewhere in my mind, I may have blamed you for it all this time. I’m sorry. I was a child, but I know now you were hurting too.

Hatori’s just in a very unfortunate position where he’s embedded in the pain of so many other Members of the Zodiac, and it’s hard for him not to blame himself for their pain even when he’s just following orders. I suppose that’s probably a conflict not unheard of for doctors.

Shigure: I don’t always have to be the one to unruffle his feathers, do I? I’m not in the mood.

I wouldn’t call him “inconsistent”…there is a method to Shigure’s madness, just not an immediately obvious one.

Anyhow, Haru heads out to see Rin (and presumably greet the New Year with her – even though she’s asleep, that’s probably the only way she’d tolerate it). And Momiji manages to smuggle the DVD to Kureno…

Last year, I wished that Yuki-kun and Kyo-kun would learn to get along. But this year, I’m going to wish for the curse to be broken. And for everyone to be happy. Even if it’s sparked by something trivial, I wish for change to come.