Kyo experiences some severe emotional fallout from that play. 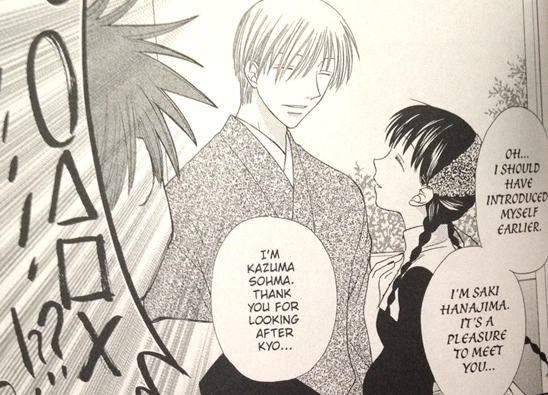 And this scene just about gave him a heart attack (for more than one reason).

Kazuma: Your classmate is cute.

Kyo: Master! Do not marry her!

Kazuma: Where did that come from? Oh, Kyo, you’re still a child.

Those two are so adorable.

Kazuma: Oh, I’d like to say hello to Tohru-san also. Do you know where she is?

Kyo: No…no idea. It’s not like I keep track of where she is all the time. (internally) No way. There’s no way she really feels like that. There ain’t no way.

Anyhow, Momiji recorded the play and offers to make DVDs for everyone (and Tohru in particular).

Momiji: But you really want me to give one to Kureno, don’t you?

Momiji: I was right!? I knew it! […] I figured it out when Arisa yelled during the play.

Momiji is just a little bit sharper than Tohru… 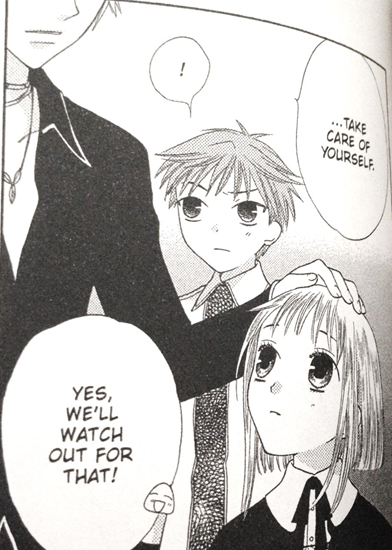 Hiro: Haru-nii…! You really are kind to everyone. To a fault…! But maybe that kindness is what made Rin so sad…

Haru: Why would you bring up Rin? Hiro…Hiro. Don’t tell me that you’re in love with Rin?

He did his best to cover his tracks, but this still clues Tohru in that Haru might have been involved with Rin.  And now poor Hiro has a mess of his own to clear up with Kisa, but they’re getting better at communicating, so I have no doubt they’ll sort it out.

Meanwhile, Yuki is off Student Council Presidenting when he encounters Machi cornered by a bunch of his fangirls.  He naturally wants to step in and put a stop to it, but Manabe stops him.

Manabe: If you’re gonna half-ass being nice and encouraging someone, then it’d actually be kinder to leave them alone from the start. And another thing – if someone’s being nasty to you, you should sass them right back. Just standing there and taking it means it’s partially your fault too.

Yuki: Yeah. Sure. That sounds good. It’s ideal in theory. But there are people who get crushed by that logic.

I do heartily disagree with Manabe’s assertions (that’s what you call “victim-blaming”), but it turns out he does actually have a plan, so Yuki agrees to keep watch and make sure the confrontation doesn’t get violent.

Fangirl: Do you even remember what you said before!? That Yuki’s not a prince!?

Machi: …I did say that. I guess that’s just how it looks to me. Is that a problem?

Fangirl: A big problem! […] What’s wrong with you? Are you in love with Yuki or something?

Fangirl: Don’t play dumb with us, moron! Tell us what you really think about Yuki!

Machi: He’s a bit of an airhead. And he’s also very lonely. Even though he’s surrounded by people, even though people say he’s “Prince Charming”, he’s lonely.

That’s probably the most accurate description anyone’s given of Yuki so far.

Then Manabe’s plan goes into action: He uses the PA system to announce a special “commemorative photo session with the student council president”, and the girls are off like dogs after a squirrel.

Manabe: Oh, I see. That makes sense. Maybe that’s what she was referring to then. You’re “not a prince,” huh? Yeah, I think that’s well put, don’t you think? You’re a princess. Ow! Ow! I’m sorry! I won’t say it again, Princess!!

Keep on being an idiot, Kakeru.

No way. There’s just no way. Even thinking that is unforgivable.

Kyo’s feelings have been building up over the last few chapters, and now they’re just about ready to boil over…but he’s still not saying anything to Tohru.  The lack of communication is frustrating, but unfortunately perfectly in character for the grumpy kitty.