How do I say this? The Student Council is like a gathering of problem children. Second-year secretary Kimi Toudou likes to stir up trouble. First-year secretary Naohito Sakuragi is always uptight. First-year treasurer Machi Kuragi tends to avoid eye contact and barely says a word to anyone. But as for second-year vice president Kakeru Manabe, I think it’s obvious how he’s a problem child.

These kids are so busy messing with each other (intentionally or not) that Yuki seems to be the only one getting anything done (or at least that’s how he sees it).  I’ve been in situations like that before for group projects, but never something that requires regular effort for an entire school year. My condolences.

Yuki: To be honest, working with this guy is tiring. He has a lot in common with my brother, but he also reminds me a little of [Kyo]. The way people naturally gather around him. It’s like he glows with a light that I don’t have. A bright light that throws me into shadow. Don’t. Don’t run away. Don’t lose to the voice that whispers in my ear, to that side of me…

Yuki may be more popular, but Manabe (and Kyo) is more easygoing and approachable.  He still hasn’t figured out how to lower his walls and let people get any nearer than arm’s length. 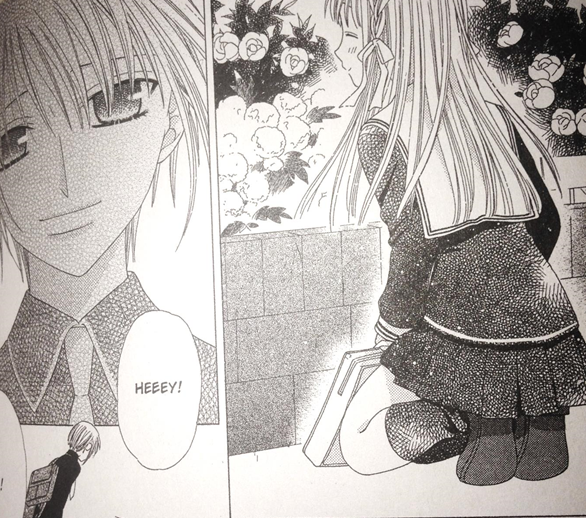 At least Yuki’s able to be comfortable with Tohru now.

Then Manabe starts an argument about colors.

Yuki: Um, Toudou-san, you know, it’s just a color. You don’t need to take it this seriously.

Yuki is especially flustered by this request (but can’t say no to Kimi Kimi). “Kimi” is actually a second-person pronoun in Japanese (so it means “you”), and it’s considered improper or rude to speak to someone in second person instead of third person (using their name or title).  Aside from it being out of character for Yuki to call any such recent acquaintance by first name, “Kimi” would feel particularly rude (and also he frequently addresses Manabe with that pronoun).  This means that Kimi speaks of herself in third person instead of first person by way of a second person pronoun.  And Manabe insists that he start calling Machi by her first name, too. 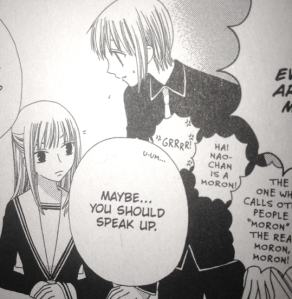 After that pointless argument blows over, Yuki runs into Manabe again, and he offers a glimpse of the average student’s perspective on Tohru’s little love triangle.

Manabe: Hey, a little while ago, you were with Tohru Honda, weren’t you? She’s kinda famous for being good friends with you. So what’s the story there? You have a crush on her or something?

Manabe: Hmm? It’s just, if that’s the case, you’re probably heading for a broken heart. I mean, the guy with orange hair…Kyo, right? Your cousin, it seems like he could be her boyfriend.

Manabe: Am I right? I’m right!? I knew it! Figures! Cause, like, that Kyo guy looks happier than you, Yun-yun.

Yuki: So then, I’m “unhappy”?…Is it fun? “This one’s happier.” “This one’s unhappier.” Is it fun measuring people up and comparing them like that? Do you get your kicks from deciding who’s superior and who’s inferior like that!? Does that make you happy!?

Obviously Yuki’s reading way too much into it (although Manabe might be reading in a little more than he should, too).  Kyo’s just the kind of person who’s easy to read, and Yuki isn’t (although Kyo probably is generally pretty happy at school).

Manabe: I’ll take being ignorant over being a Mr. Know-it-all like you!

Yuki: You’re right! That’s exactly what I am! But the one I was really lecturing just now was myself! So, sorry for that! (internally) I always compare myself to other people, and if I find myself wanting, it feels like I’m going to be erased. That’s right. Maybe I’m just not cut out to be the president after all. I bet he’d be better at it. That’s what the voice whispers in my ear. It’s so easy to give into intrusive thoughts like that. […] The biggest problem child of the bunch is me.

Manabe would be a terrible president.  But he managed to hit a nerve with Yuki here, which isn’t necessarily a bad thing.  Some people really do need conflict and arguments to be able to see their own feelings, good or bad. 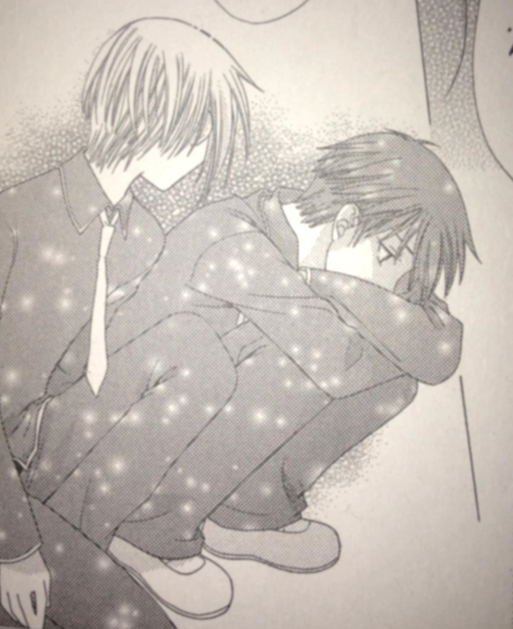 Manabe: Hey. Where should I stand so I’m able to see the same thing? If I see from the same point of view, will I be able to understand someone’s feelings so I don’t hurt them? […] You caught me off guard, and it pissed me off. Because…you’re a lucky guy. You’re lucky, Yuki. Because you understand.

He manages to bring out Yuki’s weaknesses, but also acknowledges the strength that Yuki couldn’t see in himself.  A clown like Manabe is no less insecure than any high schooler, even if he acts like he doesn’t care.

If we can come to an understanding with each other, even if we do fight, then maybe hanging out with him isn’t so bad. That’s what I’m starting to think, at least.