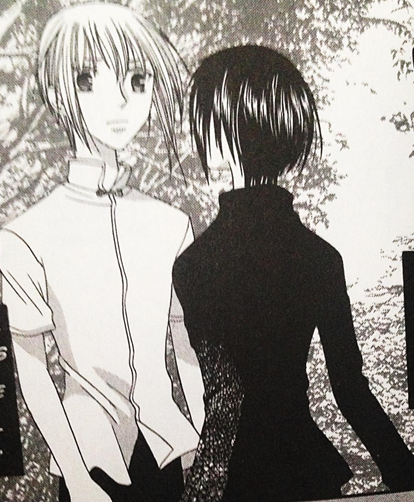 We’re going to see a lot of Akito over the next few chapters as he interacts with the rest of the Zodiac at the summer house.  First, everyone (except the Cat, Tohru, and the missing Yuki) heads over to formally greet the Head of the Family.

Kyo: I gotta think he only came to throw cold water on the fun. That guy’s always been like that. He enjoys ridiculing people.

Tohru: (internally) Akito-san really does weigh heavily on them. Especially Kyo-kun and Yuki-kun.

Of course Tohru redirects her anxiety into doing something (making pancakes).  The people heading over to meet Akito aren’t quite as lucky.

Kisa: But I wonder why Akito-san…suddenly came here. Onee-chan…he won’t be mean to Onee-chan, will he? He won’t…hit her? I’m worried about that.

I can’t.  Just keep staring at that line for yourself a little bit and remember that Kisa is maybe twelve years old.  That’s all I can say. 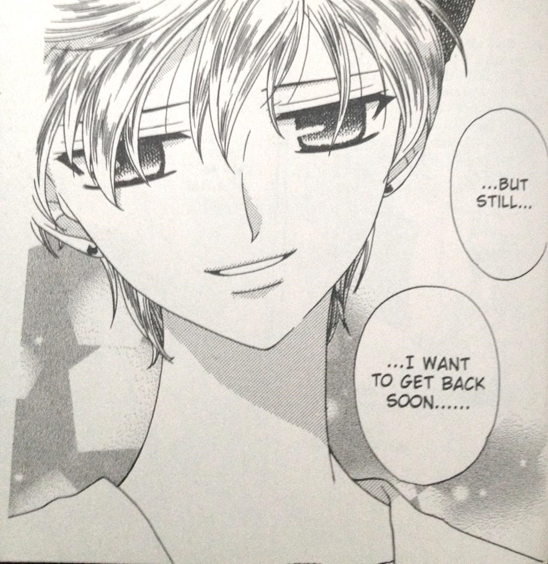 Momiji: They’re depressed. I can’t blame them. He did come without any warning. I wonder if Yuki will be all right seeing him.

I’m hardly surprised to hear that Akito dislikes Momiji, but the juxtaposition of Momiji and Tohru highlights their similar ways of coping with stress.  They both put on cheerful faces and pour their energies into worrying about other people – Momiji loudly, Tohru quietly.

Shigure: I still don’t get why Kureno-kun is here. The one member of the Zodiac Akito-san keeps away from the rest of us all the time.

Hatori: Maybe Akito gets anxious without him nearby.

Shigure: Anxious? Anxious, huh? What, did Ren-san make a pass at him or something?

For once, the reader might have a better grasp of the situation than Shigure.  Probably Akito has noticed some sort of change in Kureno’s behavior since his little rendezvous with Arisa… 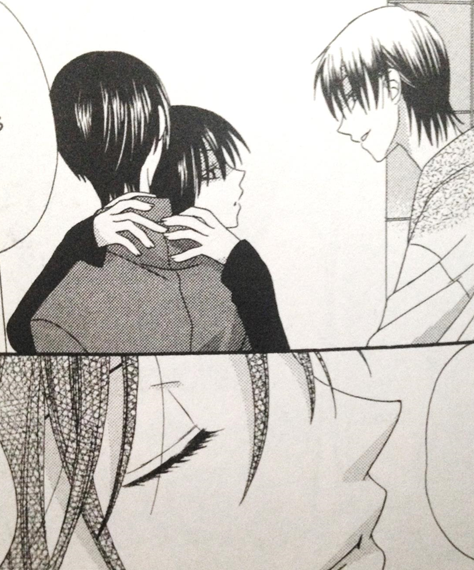 Akito: I ran into Yuki just now. I felt sorry for him, walking all by himself, so we had a little chat.

Shigure: Well, well…how kind of you.

Akito: But of course. I’m always thinking of Yuki. I gently admonished him. I told him to stop deluding himself. He looked like I’d slapped him square across the face. He’s probably bawling his eyes out somewhere at this very moment, which would just be par for the course. 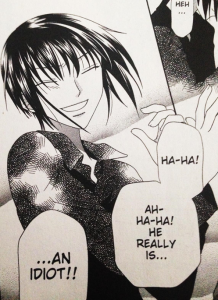 Akito: If he had any sense, he would just come back to me. I would make him feel needed…which is quite a feat, given the boring stiff that he is!

Shigure: Akito, you’re right, of course, but why don’t you go see the others?

First, somehow I distrust this smiling yes-man Shigure even more than the usual Shigure.

Second, as we’re seeing more of Akito, it’s clear that there’s just something off about him.  The casual ridicule seems straightforward enough…except that it’s a little too accurate in its aim.  Not that his assessment of Yuki is actually correct, but that he apparently hits all of Yuki’s insecurities without even trying.  Maybe you could chalk that up to his “special” relationship with Yuki, though.  What’s more inexplicable is Akito’s rather childish mannerisms.

Hatori: I can’t do anything. But whatever your game is, you’re trying to change things, so maybe you’ve got the right idea.

Hatori is slowly coming around about Shigure’s methods in light of his goal…but “causing trouble and hoping something sticks” is still an extremely immature way to try to effect change.

Shigure: You’re just too kind, Haa-san. And I’m malicious, without a bit of kindness in me.

Hatori: Are you talking about our merits? Or our faults?

Shigure: Just stating the facts. And Yuki isn’t the same kid who was locked up in that dark room. So you tell me who the most deluded idiot of all is.

Akito: Welcome. Thank you for coming over. I’m so delighted to see you. I love all of you.

Perhaps one reason why Akito comes across as childish is that he says whatever he wants to say, which is always (what he perceives to be) the truth.

After several hours pass with no sign of anyone returning, Tohru is really worried about Yuki, so she goes out to look for him…and finds him shockingly composed after his chat with Akito, so much so that Tohru never guesses that they ran into each other. 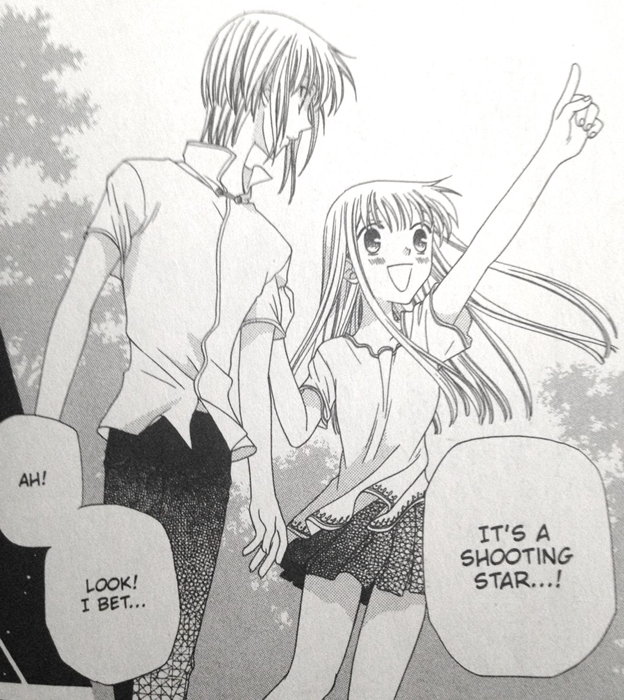 Yuki: The truth is, in the back of my mind, I may have known all along what would happen if I opened the lid. I knew what I would have to do…what I should do…it’s very simple. Maybe the simplicity is what makes it so hard.

Tohru: Did you open the lid?

Yuki: Thanks to Akito.

Whatever Akito said to him, whether it was intended to help or to hurt him, Yuki discovered some truth from it. 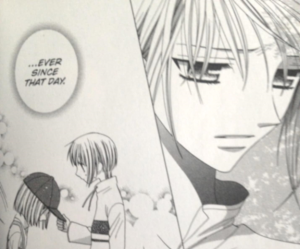 Yuki: Thank you for always listening to me. Thank you for always accepting my weakness. (internally) Thank you for not forgetting the memory of that long-ago day. Being able to save you when you were lost made me so happy. I’d always been told that I was a boring person, but that day, that time, that instant alone, somebody needed me. I’m sure you have no idea how happy that made me feel. (aloud) You don’t realize, do you? You’ve always been saving me. (internally) Your compassion, your warmth, and your happiness, without sparing anything…you keep sharing them with me. (aloud) That’s why I won’t give in. I’m going to keep moving forward. I’m going to keep believing.

It’s interesting how Yuki describes Tohru’s constant support as “saving” him, while he views what he did for her as a child as simply “being needed”.

Tohru: But then why…? Why do you seem so sad?

So Yuki did run off and cry…but for the first time, he’s not crying alone.