Akito: Is this Kyo’s true form? His body’s all ugly and twisted. And what’s that? That terrible stench…it smells like something’s rotting. Is this the Cat Spirit’s true form?

Yes, Kyo’s true form isn’t exactly as horrifying as Takaya-sensei clearly wanted it to be (she’s not the best at drawing regular animals, let alone designing one from scratch), but it’s easy to look past that when there’s so much raw emotion on the page, both from Kyo and from Tohru.

This represents one of the bigger deviations between the anime and the manga (which, again, I certainly understand why they changed it):  Tohru immediately runs after Kyo (much like in Chapter 15). And since we don’t actually get Kyo’s flashback in full until next chapter, it makes for a far more intimate struggle.

All while Shigure, Kagura, and Yuki watch from a safe distance.

Kyo: Get away! What the hell do you want? I said to get away from me! What’s wrong with you? Are you blind? Is your nose not working? I’m disgusting, right? Repulsive, right? How can you stand to look at me? I don’t want your pity! 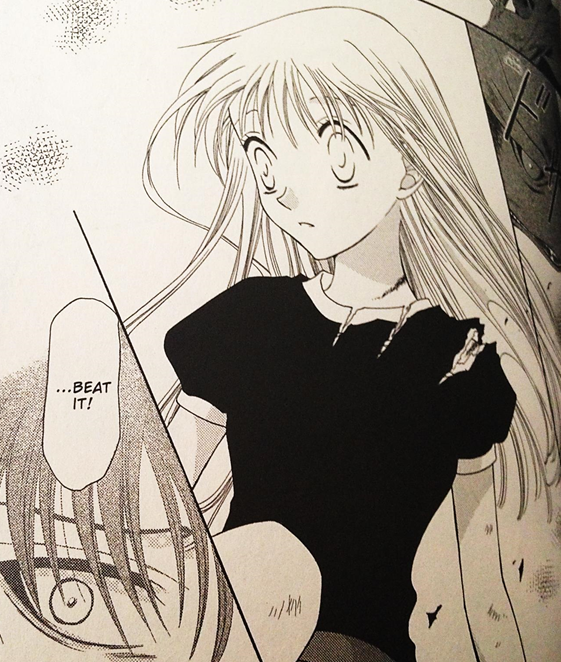 Kyo: If I’m going to lose her anyway, I might as well make it worse by hurting her like never before. I’ll make it so bad she’ll never worry about me again. […] I hate every fricking part of this. Losing her, being pitied, feeling so miserable…

It turns out there’s one more person out there with them – a ghost, perhaps.

Kyo’s Mother: That’s wrong. You’re every bit as human as I am. Evil magic has given you that form, but it won’t last long, I promise. The proof is…there. Back to normal. It’s all right. I’m not afraid. Not at all.

Kyo: I don’t believe you. You were afraid, weren’t you? Isn’t that why you checked my beads dozens of times every day to make sure they weren’t coming off?

Kyo’s Mother: No, I love you. I would even die for you.

Kyo: Why do you always talk like that? Why do you always act all maternal, but won’t even recognize the real me? […] Don’t foist that love on me! I don’t want it and I don’t need it! She could’ve been scared of me! In the end, I just wanna be together…

His mother may have believed Kyo was human on some level – she probably told herself that sort of thing and wanted to believe it, but deep down she was scared and repulsed.  It’s not that her love was fake, just that it wasn’t the kind of love he needed.

Tohru: Let’s go back to the house. You have to come back. Otherwise…(internally) I have a feeling if Kyo-kun doesn’t return to the house now, he never will.

Tohru: I can’t understand! I am scared. I hear your voice, Kyo-kun, but it seems like it’s coming from something I’ve never seen before instead of you. I am scared, but I do want to understand. Just like you’ve listened to all my whining, Kyo-kun, from now on, I want you to let me hear your complaints. I want you to tell me when it’s hard, when you’re scared, when you’re weak. I want us to confront your troubles together. Just like we’ve been doing, I want to live, eat, study, and struggle together! I want to be with you! 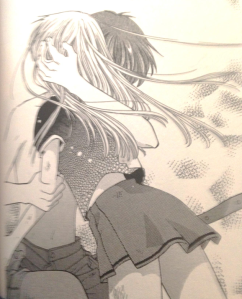 I believe most (if not all) people have some ugly part of themselves to overcome, even if it takes a while for them to see it for what it is.  I also believe that love helps us work through that ugliness and pain together.

Kyo: Why would someone like you be with me? Why would you cry for me? How could I even ask for that? I sure as hell don’t have the right. Even you being with me is a mistake. And yet, this time, I find myself thinking I wanna take care of you, and that I don’t wanna leave you. I’m wishing for it.

There are some scattered hints (particularly in these last few chapters) that Kyo has some as yet unrevealed past connection with Tohru (“this time” implies a “last time”).  But the important thing is that he’s finally opened up to her and the kind of healing she’s offering.