I don’t think there are any memories that are okay to forget. Not a single one.

Tohru and her friends are preparing to commemorate the first anniversary of her mother’s death.  When Yuki hears about it, he offers to go with them to pay his respects, but Kyo doesn’t give an answer.

Saki: I can’t believe it’s been a year since your mother passed away.

Arisa: Yeah. I still get the feeling she’ll suddenly show up saying, “My bad, my bad,” with a big smile on her face…Sorry. Didn’t mean to make you sadder. But that’s how great Kyoko-san was. 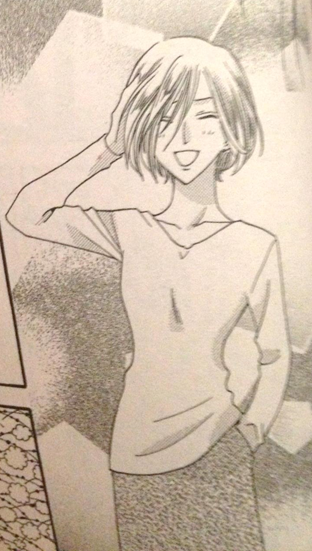 Saki: Tohru-kun has come a long way. Here we are a year later, and she’s able to smile, but between then and now, I bet she scolded herself dozens of times for feeling down. You know, if Tohru-kun died, I doubt I’d be able to smile a year later. Maybe I’d even wish I’d never met her. Tohru-kun is really trying her best.

Tohru herself doesn’t contribute much to the conversation about her mother, instead diverting herself by thinking about the Sohmas.

Tohru: None of the Sohmas I’ve met talk much about their parents…

She manages to keep up this train of thought until she runs into Momiji at work.

Momiji: Is Yuki going to pick you up again tonight?

Momiji: Kyo should pick you up too once in a while. He’s so stubborn.

Tohru: Oh, that’s right. Momiji-kun, […] which of your parents is German?

Momiji: Mama and Momo usually come to pick Papa up from work. Ah, it might be about that time now.

Tohru: Then you’ll all go home together, huh?

Momiji: That would be nice. But Mama doesn’t know about me.

Mama: Momiji-chan, […] if you stay out too late, I’m sure your mother will worry.

Momiji: Yeah. Like I said, Mama doesn’t know about me. Or more like, she forgot. Her memories were erased. Now Mama thinks I’m the son of some other Sohma. Children possessed by spirits are born two months early. You meet and fall in love with someone. You get married. You have a baby.  But when you cradle that child, it turns into a strange baby animal. I wonder about the depths of despair a mother of such a child would feel. In many cases, the mother of a child possessed by such a supernatural being either becomes extremely overprotective or rejects her offspring. In my case, Mama rejected me. She rejected me with every fiber of her being. She refused to look at me. Even so, she was always on edge and often screamed hysterically. Looking back, I figure she was emotionally broken. Like Kana.

Papa: Mama’s condition is really bad, but the doctor said she may heal if she forgets about you. […] If you love Mama, will you help her?

Hatori: Are you sure? Are you positive you want to forget him? You won’t have any regrets?

Mama: The biggest regret of my life has been giving birth to that creature.

Momiji: And so, I was scrubbed from Mama’s memory. She got better after that. Two months later, she was smiling again. I hope I was able to help Mama. But as for me, I want to live with the burden of memories. Even the sad memories, even the memories that hurt me, even the memories I wish I could forget. I have faith that if I keep doing my best to bear that burden, without running away, I’ll eventually become strong enough that memories like that won’t get me down. I want to believe that. I want to believe that not a single memory should be forgotten. That’s why I really didn’t want Mama to forget me. I didn’t want her to give up. But this is just me being selfish.

Tohru: I believe it too.

It’s passages like this that made me want to write this series.  When I first encountered this in the anime, I thought it was sad (and it finally made me sympathize with Momiji, because how could you not after that?), but I really didn’t understand what he was saying about painful memories.  Now I do.  It’s all too easy to shuffle off certain parts of your life to the back of your mind and leave them to rot, effectively erasing them.  But I know now that I need to remember my pain, because I survived it, and that alone is precious to me now.

Of course, this also explains a lot about Momiji as a character. He watched his mother suffer because of him for the first few years of his life, and then she effectively abandoned him, but he can still watch her now that she’s thriving – watch her and Momo and his dad being happy together. He’s been barred from his own family, but he still takes pride in them and enjoys knowing that they’re happy. He’s become a keen observer, and having experienced so much sadness at such a young age (not to mention being separated from his family at around age 8), he’s been forced to grow up far too quickly.  Maybe that’s’ why he acts so childish now – because he didn’t have much of a chance when he was actually a little kid.

This is one of those rare occasions when Tohru breaks down and cries, and it’s pretty obvious that while she is genuinely sad about Momiji’s situation, a lot of it is pent-up, unresolved grief regarding her mother’s death.  She’s been tempted to just forget about it so she can keep smiling, but now she realizes (at least for the moment) that she needs to experience that pain and sadness if she wants to preserve those memories.

Now why the focus on Kyo and his decision to visit Kyoko’s grave in this chapter about memories? I suppose you’ll have to wait and see…

I want to hold every memory in my heart and believe in it. So I become strong enough to stick it out, and to one day overcome them, until they become precious memories.