And so, a new banquet begins… 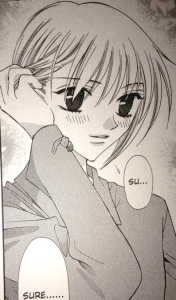 This chapter is more important than it may initially appear.  I mean, a sleepover with Tohru and her BFFs doesn’t sound terribly interesting at first glance, but on top of the foreboding bookends with Akito, it provides a context for the dynamic between Saki, Arisa, and Tohru.

Arisa: It seems Tohru fits right in here. I’m happy for her…and I know she held out on us for a while so we wouldn’t worry. But we made a vow before Kyoko-san’s grave that we would be there for her whenever she needs us. It may sound melodramatic, but Tohru was our first buddy, and there’ve been lots of times when she came to our rescue, so not being able to help her out at all this time has been frustrating. It’s like, if Tohru had to go through all this and couldn’t rely on us as friends, what good are we?

Their main concern (or at least their stated concern) is whether the Sohma household is a “suitable environment” for Tohru to live in, but I think Saki and Arisa are really trying to figure out where they fit in with Tohru’s new life.

Kyo: She ain’t the kind of girl who worries about stuff like that.

Yuki: That’s because Honda-san isn’t someone who asks for the moon.

Then Tohru tells the story of a certain baseball cap she keeps with her. And who should be eavesdropping (with suspicious intensity) but Kyo?

When she was little, a group of boys chased her, and by the time she escaped she was completely lost. After hours and hours of just waiting, she saw a boy about her age in a baseball cap. He started off, and Tohru followed.

Tohru: I kept almost losing sight of him, but each time the mysterious boy would wait for me.

In the end, the boy gave her his hat and disappeared, having led her back home.

Tohru: If we did meet again, the first thing I’d do is thank him. Although he may have forgotten all about it. 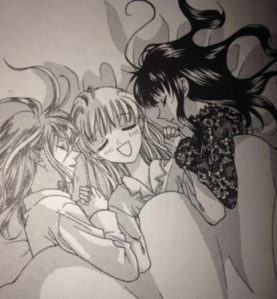 Arisa: Y’know, you’ve had it rough ever since you were a little kid.

Tohru: I totally disagree! Recently I’ve realized just how lucky I am. I get to live with the Sohma family, Mom loves me, and I have two amazing friends named Uo-chan and Hana-chan who are always there for me. That’s given me more support than you can know.

Saki & Arisa (internally): Instead of wishing for all kinds of things, she treasures what she has right now, right here.

Tohru will always need her best friends to do exactly what they’re doing here – look out for her best interests when she’s a little careless about her own wellbeing.

The banquet has begun. Whatever does or doesn’t happen, good luck or bad, not even God knows.

This chapter was easily one of the worst victims of the anime adaptation, as not only was all the stuff with Akito cut out, but the entire hat story. They tried to make up for it by adding a little of Saki and Arisa’s backstories from later in the manga, but even that was a little too dark for the anime to do more than hint at it.  So instead they added a ton of slapstick and wacky hijinks that kind of make all of the characters look really stupid (but especially Saki and Arisa).

The scenes with Akito go a long way toward establishing him as Tohru’s opposite.

Shigure: Since Tohru-kun came into our lives, both Yuki and Kyo have become more lighthearted, in a good way. I hope they continue in this direction. Although I’m sure you want the whole thing to fail…sorry to disappoint you. Tohru-kun is several score the person you are.

Akito: What can I say? I want the moon.

Is Shigure plotting with Akito or against him? The answer is very complicated and won’t be coming out anytime soon, anyway.