Once upon a time, many years ago, there was a happy Prince. One day, the Prince obtained a comforting warmth. The source of this warmth, however, emanated not only tranquility, but also unhappiness, pain and loneliness… 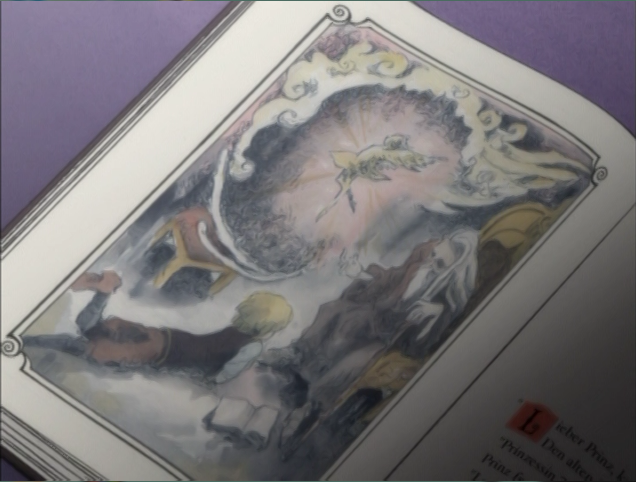 This episode, we find the first rumblings of the conflict that will dominate the rest of season 1: The fight for Mytho’s heart (or lack thereof).

Rue: What would you do if Princess Tutu really existed?

Rue honey, I know you’re determined not to help Fakir, but you could at least try not to rouse suspicion!  Then again, maybe that’s the point: Rue’s not ready to face her own feelings about the situation, so she purposely raises her walls and pushes everyone away by doing her best to irritate them.

Rue: What, you didn’t go chase him down like you did the other day? And then you suddenly disappeared for some reason…

I think this is just Rue trying to do the same thing with Duck that she’s made a habit of with Fakir (of course it doesn’t work). Mytho’s feelings are beginning to guide his actions in increasingly tangible ways, like sticking up for both Rue and Duck.  Also, he invites Duck to dance because he’s lonely.  Fakir is not happy.

Fakir: When you were wandering aimlessly, completely stripped of all your memories, I was the one who gave you the name of Mytho. I am the one who saved you, and don’t ever forget that.

One good deed doesn’t give you license for abuse, Fakir.

Duck has finally had enough of Fakir’s behavior toward Mytho, but she gets a little carried away and lets drop to him that she knows about Mytho’s heart and that he’s getting it back.

Fakir concludes that Duck must be helping Rue to restore Mytho’s heart, and subsequently lays out his plan to counteract it: Lock up Mytho in the dark until he stops feeling.  Misguided as his methods may be, Fakir does actually bring up an important point: Duck really doesn’t know that much about Mytho or the people around him.  All she has is her belief that Mytho will be better off with a heart than without. 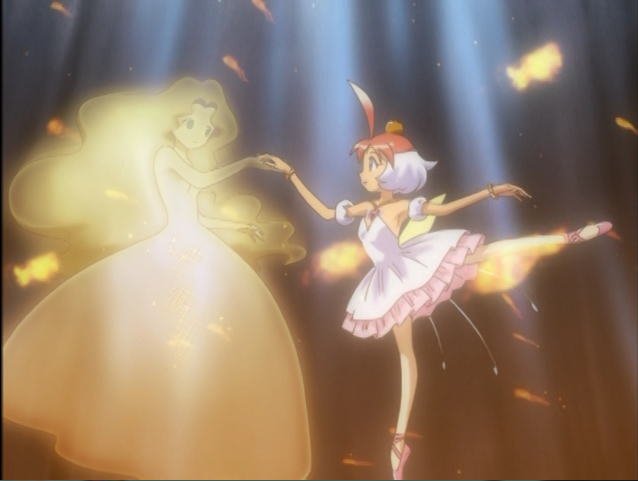 I always enjoy this episode – there’s a certain warmth and simplicity to it that’s epitomized by the Lamp Spirit.  She’s one of my favorite episodic characters even though she makes no significant impact on the plot.  She holds Mytho’s feeling of Affection, and her conflict is resolved when she agrees to go home with Duck.

This episode features “The Catacombs” from Pictures at an Exhibition in the climactic scene (because apparently there are catacombs beneath the school library).  Two recurring musical motifs appear, one for Rue and Mytho and one for Fakir.  Rue and Mytho are represented by “Aquarium” from Carnival of the Animals (AKA that song that sounds like the overture in Beauty and the Beast); Fakir’s theme is Beethoven’s Coriolan Overture, which is about a warlike man who ultimately dies because he refused to listen to compassion.  There’s no central ballet, but it might have taken some inspiration from the E.T.A. Hoffmann story The Golden Flower Pot, which features a heavy fire motif and a pivotal festival (among other parallels that could fill a whole post). The main plot of the episode is Rue (and in turn Duck) trying to get Mytho to the Fire Festival so that they can dance and win the Golden Apple, which is supposed to mean the couple is bound together forever.  With Fakir’s interference, he’s not able to make it until the festival has ended, but he still dances with Rue, and with the feeling of Affection, he even smiles.

Duck: This is how it should be.

But all’s not as perfect as Duck could wish.  Rue’s not only surprised, but actually frightened when she catches Mytho smiling at her.  And Fakir is yet to be reckoned with, standing in direct opposition to Duck’s ideal.