Once upon a time there was a man who died… 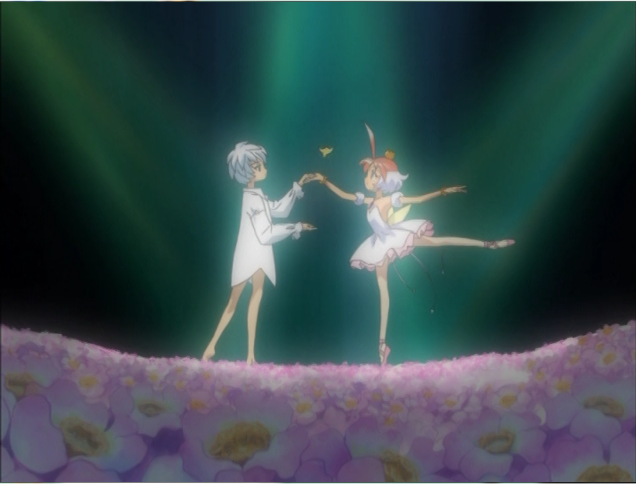 Well, first of all there’s the music.  Each episode has a (German) subtitle letting you know what the primary musical themes are (or at least the theme for a climactic scene), in this case The Nutcracker: Waltz of the Flowers.  But of course it’s not just about the music.  A strangely hollow prince who somehow gets mixed up with a young girl? Now where have I heard that before…

On a more technical note, this first episode is written by Michiko Yokote and storyboarded & directed by Sato (Ikuko Ito, the other person I mentioned in the intro, is more of a constant influence as animation director).  While I can’t definitively say how much influence Yokote had on the creation of the story, she’s certainly adept at telling it.  This episode mainly focuses on Duck and Mytho (the titular prince, pronounced “mew-toe”), establishing their relationship (or lack thereof).

Duck: If I could dance a pas de deux with you, even just once, I’d give my life for that

Be careful what you wish for – a certain not-quite-dead storyteller might take you up on that offer!  Speaking of which, I think I’ll explain that prologue a little, as I’ve seen a lot of people get confused about it (especially on a first viewing).  There are three characters mentioned in the prologue: The “man who died” (named as Drosselmeyer in another episode or two, aka that creepy old dude with the eyes and the clocks), the Prince (Mytho), and the Raven (whereabouts currently unknown).  Also, the next two episodes will look like they’re going to say the exact same thing in the prologue at first, but there’s actually new information in them, so pay attention!  After that it’s pretty obvious that each prologue is different, but we’ll get to those when we get there. 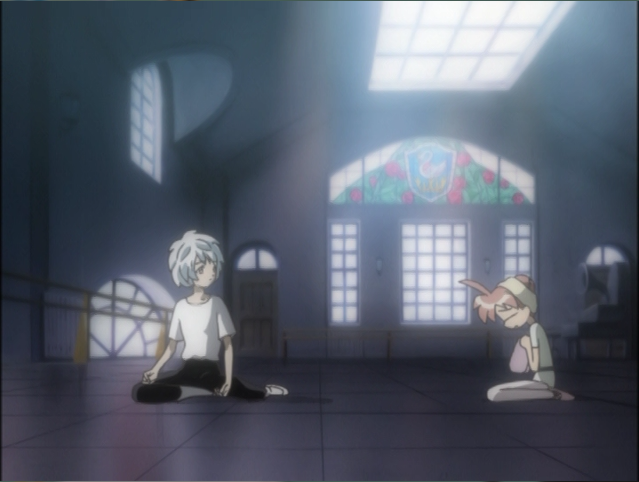 As for Junichi Sato, his most distinct contribution to the show is actually his storyboards (notably, he was pegged to do storyboards for Cowboy Bebop and Revolutionary Girl Utena, but not to direct those episodes).  Storyboards are very important in anime, as they show key images, combine the script with imagery, and generally set the mood for an episode.  In this show, Sato is behind basically every striking visual (which are surprisingly common).

As this episode is focused almost exclusively on Duck and Mytho, we get a couple recurring visual motifs for each.  Mytho is associated with red roses (for obvious reasons), and Duck with small birds (like the canary), while they are seemingly united in the image of the swan. 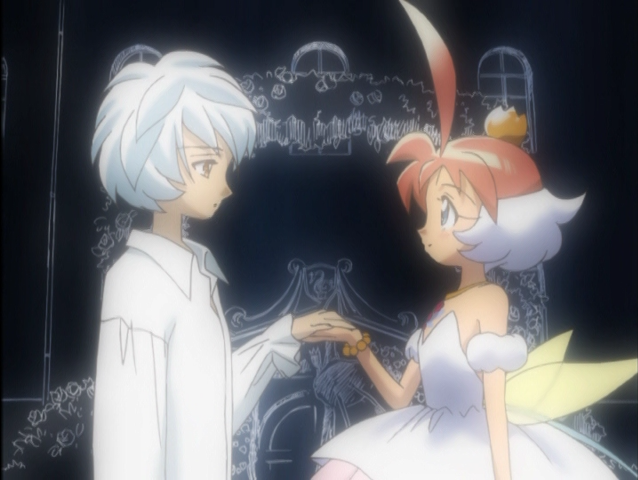 Note both the swan and the pas de deux fountain/statue in the background.

On the subject of swans, we come to Rue, Mytho’s actual girlfriend.  She only shows up in one scene, but she dances to the only non-Nutcracker piece in the episode – Swan Lake.  She conspicuously lacks any context besides the music and the dance and the fact that she’s Mytho’s girlfriend – she’s framed as if on a stage, with her peers being little more than setpieces.

Then there’s this guy.

Fakir (to Mytho):  What were you thinking doing such a pointless thing?

Duck: So like I said, he was protecting me-

Fakir: That’s why I said “pointless”

Duck: Are you this mean to everybody?

Fakir also lacks any clear visual motif.  His personality is much more defined than Rue’s at this point, but his relationship to Mytho remains ambiguous.  He’s obviously got some stake in what becomes of Mytho and doesn’t treat him kindly.  He’s also Mytho’s roommate and evidently both are quite popular at the school

Also, Mr. Cat.  In case you’re wondering, no, his apparent obsession with marrying his students is never explained, nor does it ever abate; all I can say on his behalf is that his constant failures in love actually grow endearing after a while.  Note that Duck is the only one surprised by the anthropomorphic cat teacher.

Duck: You think it’s weird to suddenly show up?

Nothing to see here!

Next time: We get to know Rue a little, and weirdness ensues.