Steven Universe continues the trend of humanizing its villains (even when they’re not technically human). 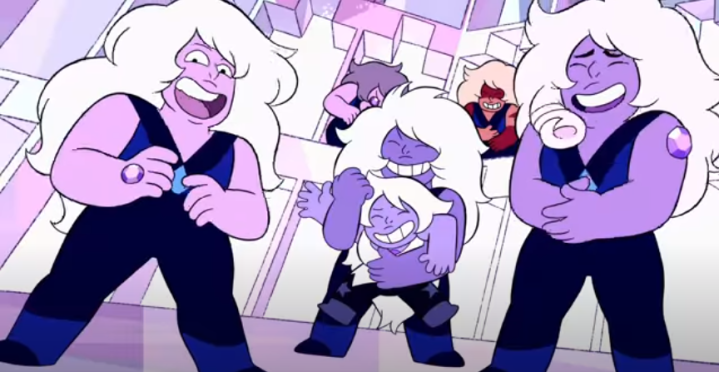 First of all, Amethyst has found her famethyst and it is wonderful.

Amethyst: You won’t believe what I’ve been through! These amethysts, they’re really, really…great! […] Your faces!

Amethyst guard: You were right, that was priceless!

They even share the same sense of humor!  It turns out the amethysts are all from the Prime Kindergarten, and she even met her “neighbors”.  Basically, she fits right in, and since there are also some jaspers and such from the Beta Kindergarten, they’re used to weird shapes and “off-colors”. 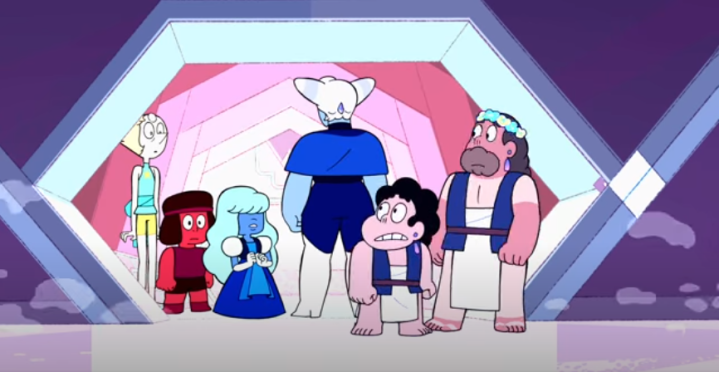 Fortunately for them, Agate is too busy sucking up to her (perceived) superiors to notice the insubordination brewing behind her back. 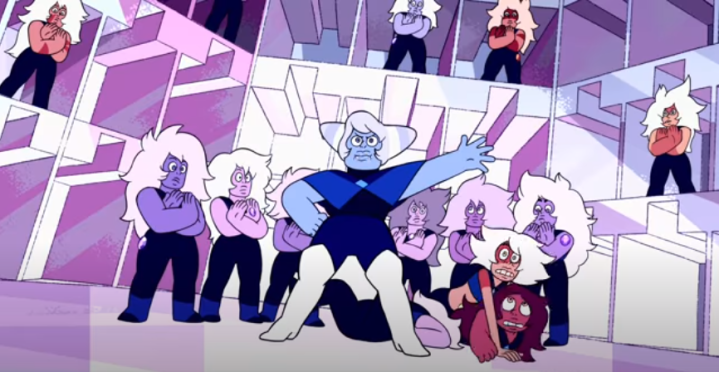 Agate: What are you all doing in here? Get to your stations! Even you hideous off-color Betas, get out of your cubbies and into your places! It’s the least you can do for the Diamond that kept your worthless, sorry Gems in service! That’s right, Blue is back already! Now go pretend your filthy vein of quartz is capable of gratitude!

Steven and Greg manage to escape unnoticed in the confusion…but it turns out they’re just out of the frying pan and into the fire. 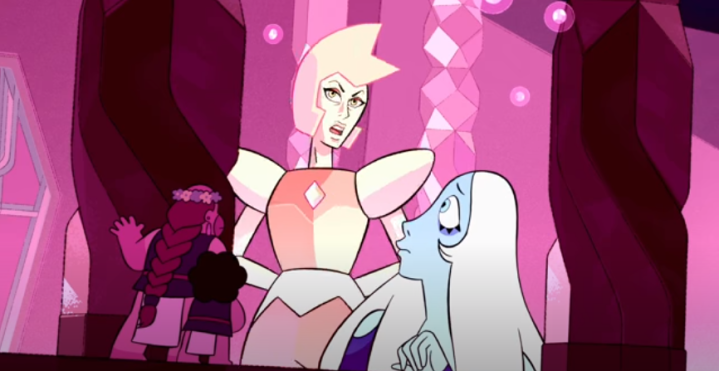 Because somehow they end up stuck in a room with two Diamonds and a bunch of bubbled Gems.

Blue Diamond: Yellow! What are you doing here?

Yellow Diamond: I’m here to bring you back to reality, Blue.

Yellow: It’s been thousands of years, Blue, and you still can’t bring yourself to destroy these Gems? She was shattered by a rose quartz! The entire cut of Gem deserves the same fate!

Blue: But they were hers. 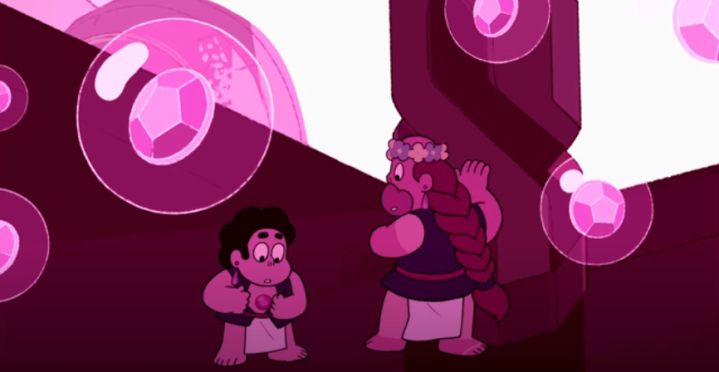 So it seems that fate of the Earth is being decided by two powerful people trying to cope with loss – one of them wants to preserve Pink Diamond’s legacy, while the other is doing her best to take vengeance and be done with it.  But Yellow’s ideology clearly won out, as Blue evidently did nothing to prevent her from constructing the Cluster.

Blue: Why can’t you just let me grieve?

Yellow: Pearl. Do something. Sing for her. Make her feel better. 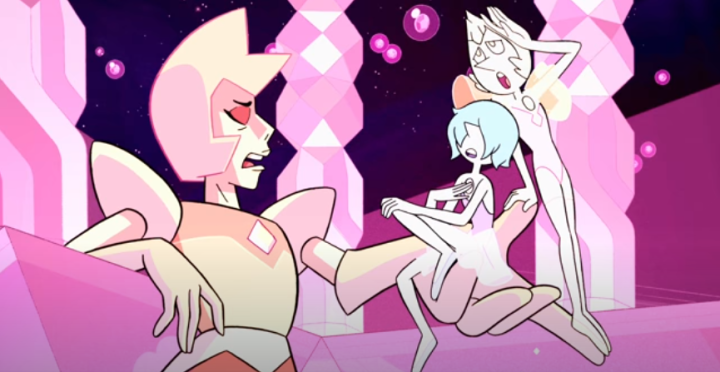 It’s somehow both silly AND slightly horrifying that these pearls can be forced to cheer someone up, especially when that someone is Blue Diamond.

Why do you want to be here?
What do you ever see here?
That doesn’t make you feel worse than you do?
But tell me, what’s the use of feeling blue?
Why would you want to employ her
subjects that destroyed her?
Why keep up her silly zoo?
Oh, tell me,
What’s the use of feeling blue?
An army has a use – they can go and fight a war.
A sapphire has a use, she can tell you what it’s for
An agate terrifies, a lapis terraforms,
Where’s their Diamond when they need her, Blue?
You’ve got to be a leader, Blue!

The somewhat discordant blend of autotuned background vocals and what might be a harpsichord makes for a very artificial sound in both an old-fashioned and futuristic sense, which makes a ton of sense for Yellow Diamond.

Oh, how can you stand to be here with it all?
Drowning in all this regret
Wouldn’t you rather forget her?
Won’t it be grand to get rid of it all?
Let’s make a plan of attack.
Start looking forward and stop looking back
Yes, of course we still love her
And we’re always thinking of her
Don’t you know I miss her too?
But tell me, what’s the use of feeling?
What’s the use of feeling? 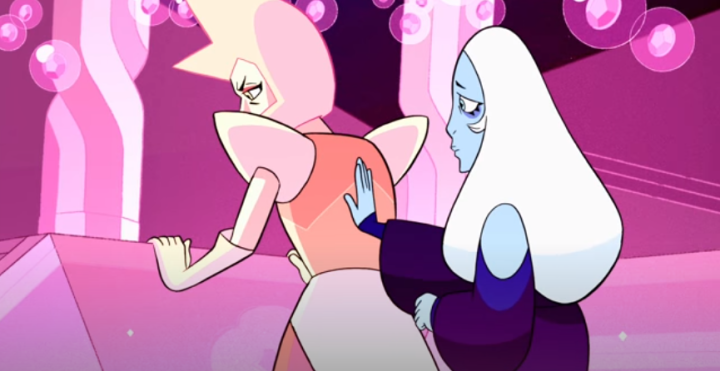 As much as she pretends the loss of Pink doesn’t affect her, Yellow’s quest for vengeance has been the primary motivation for the whole plot thus far – at least until Blue showed up on Earth, also in response to the loss of Pink Diamond.  Basically, we’re learning that the whole conflict is centered around Pink Diamond.  Rose seemingly acted under the assumption that shattering Pink Diamond was the only way to free the Earth, but instead it made the planet a focus for all of the Diamonds’ intense (largely negative) feelings.  Even Blue, who’s against destroying Earth, is only really concerned for preserving it as Pink’s colony, like she’s preserving the Human Zoo because it was Pink’s pet project.

Then Sapphire and Ruby finally show up, although Agate is irritating enough to the Diamonds (or at least Yellow) to deflect a little of the pressure from poor Sapphy.

Agate: You’ll be pleased to know that your sapphire has completed your special delivery.

Agate: The special delivery you requested from Earth, of course.

Blue Diamond: I never asked any sapphire to go to Earth. 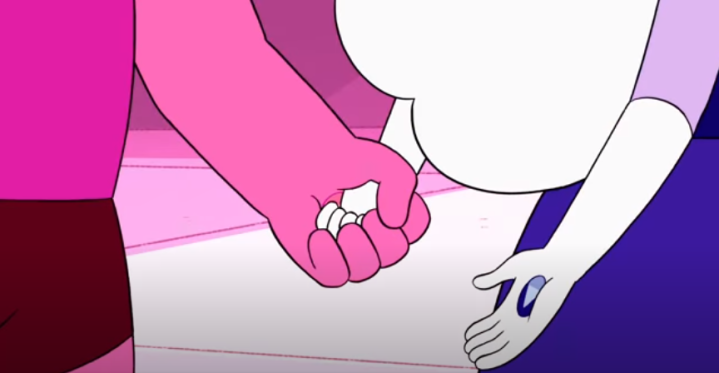 Sapphire: My future vision…foresaw you, my Diamond, desiring more humans for the zoo, so I acted accordingly.

Yellow Diamond: Is that what you want? Sapphire, has the Cluster emerged yet?

Sapphire: No, it has not.

Yellow Diamond: Then there’s still time. That will be all.

Always in motion the future is, especially when Ruby has anything to say about it.

So they finally manage to all get back to the landing bay together, and their final obstacle will be Agate.

Agate: Two Diamonds. One day! What an honor! I don’t think anything could spoil this for me! 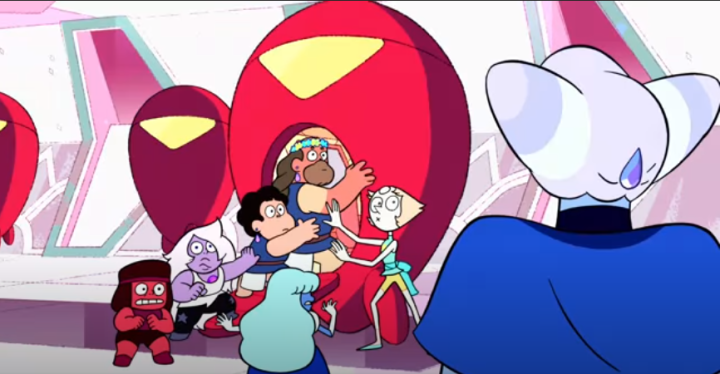 But the amethyst guards like their new friends much better than Agate, so she’s left to face the Crystal Gems alone.

Garnet: I’ve been waiting to do this all day. 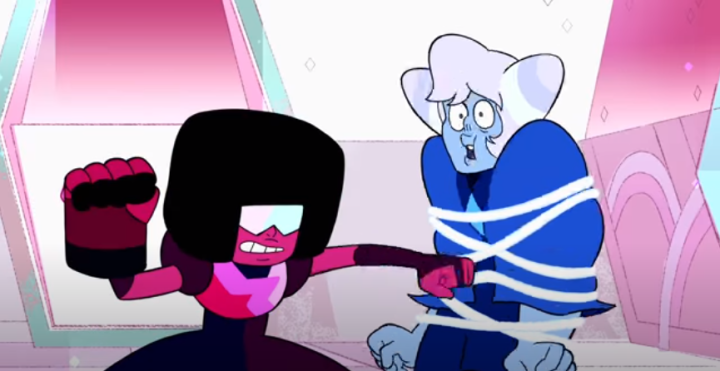 Agate: I’ll report you to the Diamonds! All of you! You’ll all be shattered! 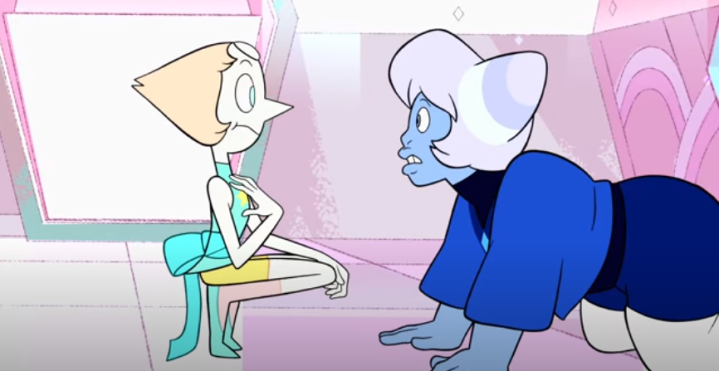 Pearl: You’ll really tell the Diamonds that you allowed a band of traitorous rebels to infiltrate a secure facility and escape from right under your careful watch? Doesn’t sound like a wise thing to do, Holly Blue. So do yourself a favor and keep your mouth shut. That will be all.

Pearl has some sick burns when she’s really annoyed! 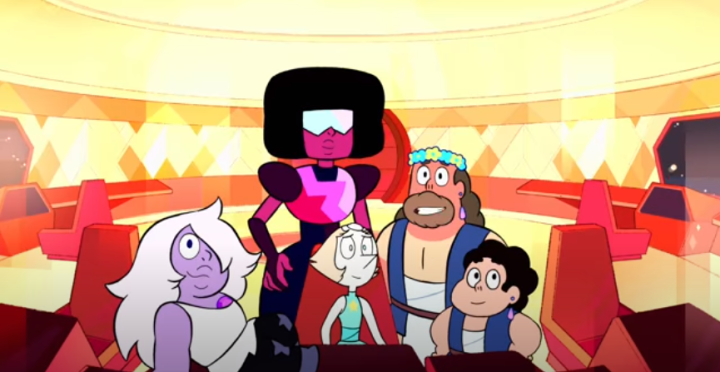 Greg: Thanks so much for coming to get me. That has to be, like, the third craziest weekend I’ve ever had.

Steven: Dad, I’m really sorry I got you into all this. This whole thing started cause I wanted answers…

Greg: You don’t have to be sorry about a thing. I hope you found what you were looking for.

Steven: I did. I found you!

Steven is definitely a sweetheart, but it is worthwhile to ask what he really was hoping to find.  He was looking for answers about Pink Diamond, and he’s certainly learned more about her, if not in the way he expected.  The most striking thing for him is probably how much the other Diamonds miss her, and I imagine his takeaway is mostly to strengthen his resolve against shattering.