Now that he’s assumed the role of “big brother”, Hiro finally gets the courage to face his past failures – and perhaps Kureno is starting to set his own failures right.

But the actual plot centers around Rin’s increasingly suspicious absence, which has been commented upon by everyone from Kagura to Tohru to Hiro’s mom.

Yuki: It’s about Rin…I hear she’s in the hospital? Haru, do you know which hospital, or anything about her condition?

Haru: Why do you ask?

Yuki: I only know Rin is hospitalized because Honda-san told me…she’s worried. […] It seems those two hit it off.

Haru:  Rin…you’ve made a friend…I see…

Haru, you are adorable.  But he’s also just as out of the loop about Rin as everyone else.

Haru: Hmm…yeah. Normally I’d be going crazy right about now, huh…? Maybe there’s something wrong with me. […] Maybe my head’s been in the wrong place.

Rin: I’m all right. You’re here with me, Haru, so everything’s all right.

Hiro: But maybe that kindness is what made Rin so sad…

Haru’s stuck puzzling out Rin’s behavior, but he lacks a very important piece…

Meanwhile, Kisa and Hiro are being abnormally adorable. And a little philosophical.

Hiro: When I look at Hinata, I feel like an idiot. It’s like – here’s a life right in front of me, and she doesn’t know the difference yet between right and wrong. A totally innocent life before my very eyes. And yet here I am, so preoccupied with vanity and fear. So looking at her makes me feel small and stupid. I want to become stronger than that. I want to become a protector.

Then they literally bump into Haru, and Hiro can’t help but bring up Rin again.

Haru: Tell me, Hiro. Did Rin…seem unhappy to you? Did she seem hurt?

Hiro: […] Are you talking about what I said back then!? Forget that…that was just me taking my own guilt out on you. But…I do know that she was suffering. Haru-nii…Rin…Rin was…pushed off a second story balcony by Akito. Those major injuries weren’t from an accident. Akito found out you were seeing Rin, and he…he…[…] Akito…Kisa…that time when Akito hit you…it was my fault. I made Akito angry, and he took it out on you. He…hurt you. I’ve wanted to apologize all this time. I’m so sorry. Haru-nii, you too. I’m sorry. In both cases, I was told to keep my mouth shut, so I didn’t say a word. So if you’re angry with me, I understand…Rin is trying to break the curse…! She’s trying so hard, all to set you free from Akito…and from herself. That’s why she broke up with you. You need to tell her, “It’s okay now.” If she keeps it up, Rin’s mind and body will give out. She’ll end up suffering alone forever…

Poor Hiro has been suffering alone, too – being forced to keep secrets like that is painfully isolating, and it built up a sense of guilt in him that he really didn’t deserve.  He wants so badly to keep his loved ones from being hurt, yet he ended up feeling responsible for both Kisa and Rin. At least he got the opportunity to come clean to Haru and Kisa at the same time.

Elsewhere on the Sohma estate, however, Kureno has been doing some investigating.  He noticed food being carried regularly to an off-limits, unoccupied building, so he confronts the servant.

Kureno: Who are these meals for? […] Give me the key. You can tell them I took it by force. That’s what I’ll say too. But this here…this has to be stopped.

Servant: She…hasn’t eaten in days. At this rate, she’ll die! Save her, please…!

Haru heads off without another word, but of course Kisa has something to say to Hiro.

Kisa: Hiro-chan…has that been bothering you all this time? My injuries…even when I was smiling…deep inside you, Hiro-chan, all this time…you’ve been hurting…? I’m sorry. I’m so sorry…I never noticed, because I was only thinking about myself.

Hiro: Why are you apologizing, Kisa!? That’s not right! It was…it was my fault…

These two are so adorable and they actually manage to COMMUNICATE and I love them to bits. 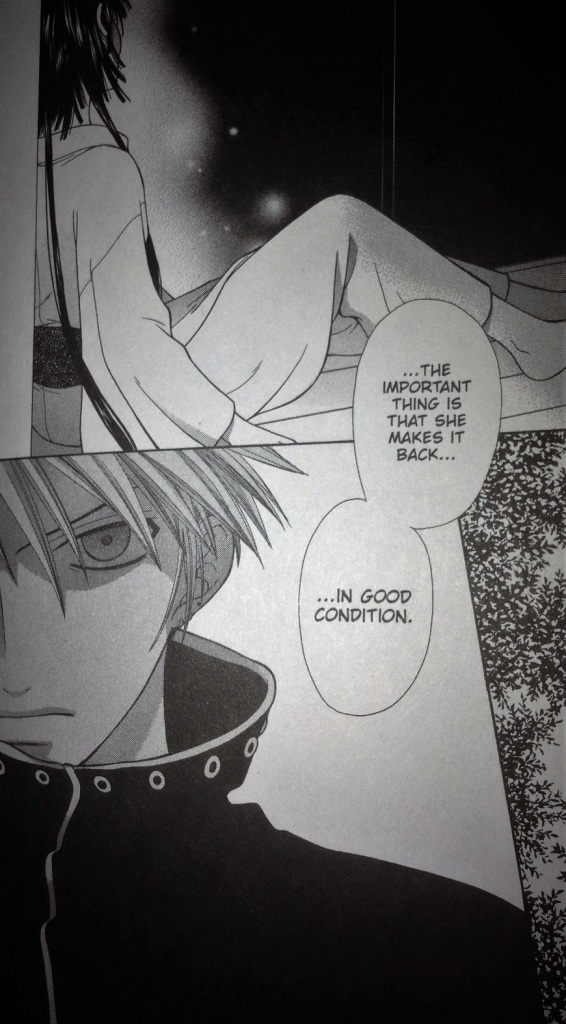