The extremely unorthodox courtship of Tohru’s parents continues to be kind of uncomfortable as a not-quite-teacher not-quite-dates his not-quite-student (who is maybe fourteen or fifteen, tops). 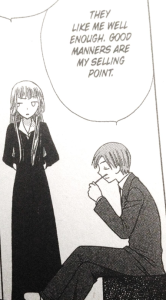 Apparently Katsuya gets away with it by employing his father’s influence, because he was considered a great teacher at the school.

Katsuya: My father’s influence can come in handy at times. As long as I’m smart about it. With it, I can get away with some things that would normally land me in hot water.

Kyoko: …Y-you may be the worst teacher here…

Kyoko: That wasn’t a compliment…!

Kyoko’s shrewd perception of him is what keeps their relationship from feeling too creepy (at least for me). 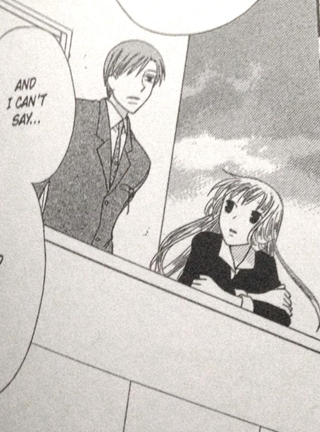 It turns out that Katsuya’s father (that is, Tohru’s grandpa) was very strict about instilling politeness and good manners in his children, hence his persistent veil of politeness.  Actually, I suppose even “not-quite-dating” is too strong a phrase, as at first they just meet at school during his lunchtime and chat (since Kyoko still can’t bring herself to attend class, even with him).

Kyoko: What does he see when he looks at me? A girl who draws on eyebrows and keeps bugging him at lunch? Why does he let me hang around? I wonder if he’s got a girlfriend.

Then Katsuya informs her that his training period is over, and he’s decided not to become a teacher.

Katsuya: It’s just not right for me. I’m a little too twisted to teach. […] Somewhere along the line, I realized I’d lost sight of myself in trying to become the person [my father] wanted me to be. Hiding my feelings and paying lip service to their desires kept them quiet, you see.

Kyoko: (internally) He must be lonely. Just like me, his “current self” is lonely. Or else he wouldn’t have been able to say all that. I want to know more. I want to know more about him. But soon, I won’t be able to see him again. (aloud) You’re a good teacher, you know? I meant to at least make it to your last class, but, um…the classroom. It’s scary. (internally) I don’t belong there. I can’t join them after all this time. 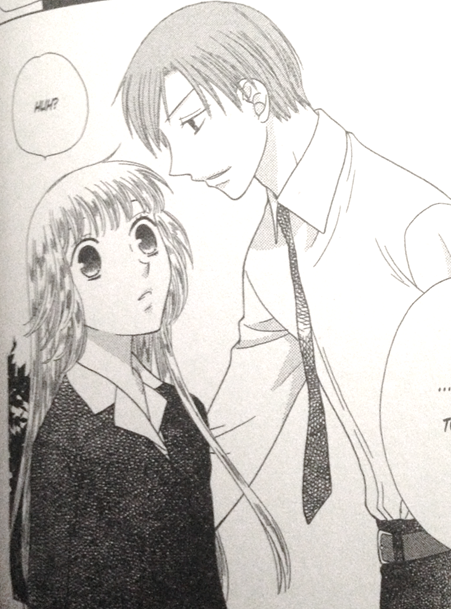 Katsuya: Let me take you somewhere you want to go, Ms. No Eyebrows.

So they head to the beach and have a little heart to heart (or as close to it as a stiffly polite man and emotionally constipated girl can manage).  Kyoko announces her resolve to study for high school entrance exams and generally become a better person. 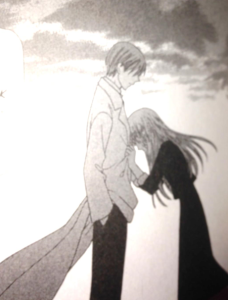 Kyoko: (internally) I hate how immature I am. I’ve been making mistakes with my life up ‘til now. Even if I never had a shot because of our age difference, if I’d at least lived a normal life like those girls, maybe I’d have had the confidence now to say, “I love you” without feeling ashamed. (aloud) Thank you.

Katsuya: You make it sound like this is our final farewell.

Kyoko: Cause it is…I’ll never see you again.

Katsuya: Grow up. There are plenty of other ways we could meet up. If you think that little school is the whole world, then it just goes to show you’re still a little kid. Besides, studying by yourself would be pretty tough, don’t you think? 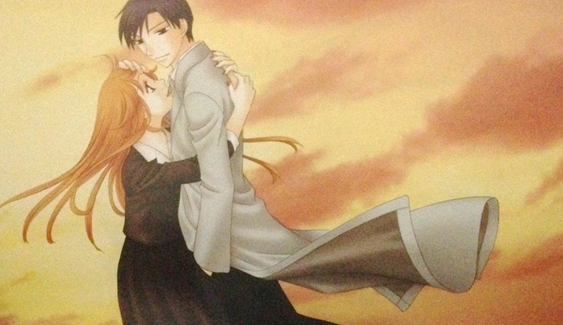 So he starts tutoring her in his spare time, and apparently she does end up going back to school. 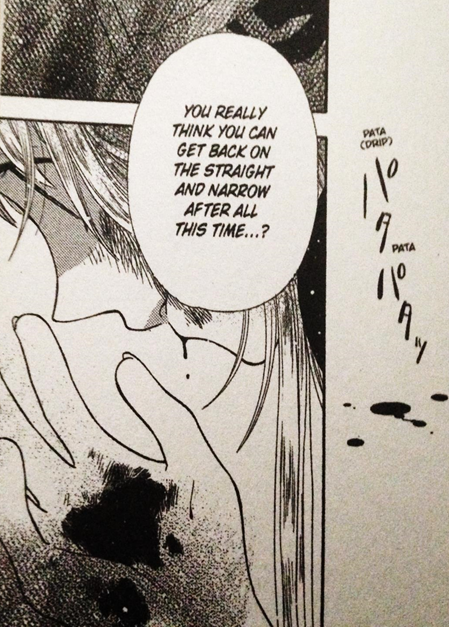 She’s beaten up by her gang for leaving, landing her in the hospital – and unable to take the high school entrance exams.

One phrase echoed in her head. “I got what I deserved.”

And once she’s released from the hospital, her father greets her by officially disowning her.

Father: Get out. […] As far as we’re concerned, we don’t have a daughter. We won’t be responsible for your terrible choices ever again. Live or die however you like.

This is what I deserve. I’ve been doing whatever the hell I wanted all this time, but now I have to pay the piper. 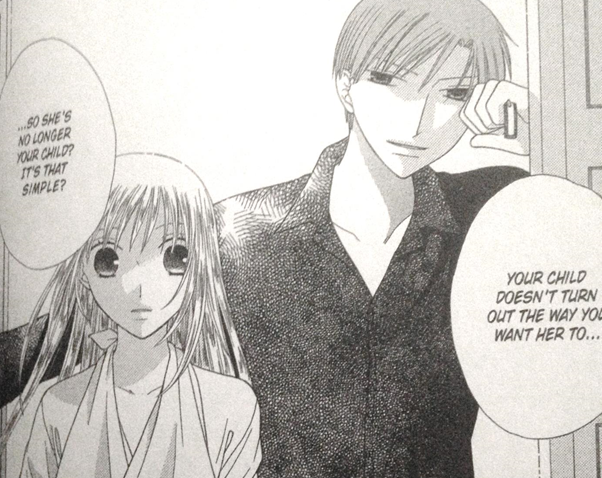 Then Katsuya comes in, very politely and scathingly chewing them out.

Katsuya: Your child doesn’t turn out the way you want her to, so she’s no longer your child? It’s that simple? You won’t acknowledge her as your own flesh and blood unless she lives a life free of mistakes? So it must follow that you two are saints, right? Or maybe you think parenthood is something you can ditch as soon as you feel like it. The going gets rough, you get going – that it?

Kyoko: It’s okay, sensei. You don’t have to do this.

Father: What right do you have to waltz in here and criticize us…?

Katsuya: As much as it pains me to speak to you here, like it or not, you are the parents of the girl I wish to marry.

And this is the main reason why I’m ultimately okay with this relationship: Katsuya is the only person in Kyoko’s life who actually cares enough about her to help.

Kyoko: Sensei…K-Katsuya! You…you’re not serious about what you said back there, right?

Katsuya: I’m completely serious. I’m only sorry I ended up proposing to you like that.

Katsuya: You sure know how to hurt a guy. You think I’d marry you out of pity? You have so little faith in me?

Kyoko: After all, I don’t have any idea why you would choose me! I can’t understand it…!

Katsuya: It’s because you cried. You cried when you talked about how lonely you were. That was very…human. That’s when I fell in love with you. There was a time when I too was angry at the world. I thought everyone except me was scum. But I was never able to cry with such pure honesty…I can’t cry. I always kept in mind that you were still in middle school, but right from the beginning, I never intended to let you go. 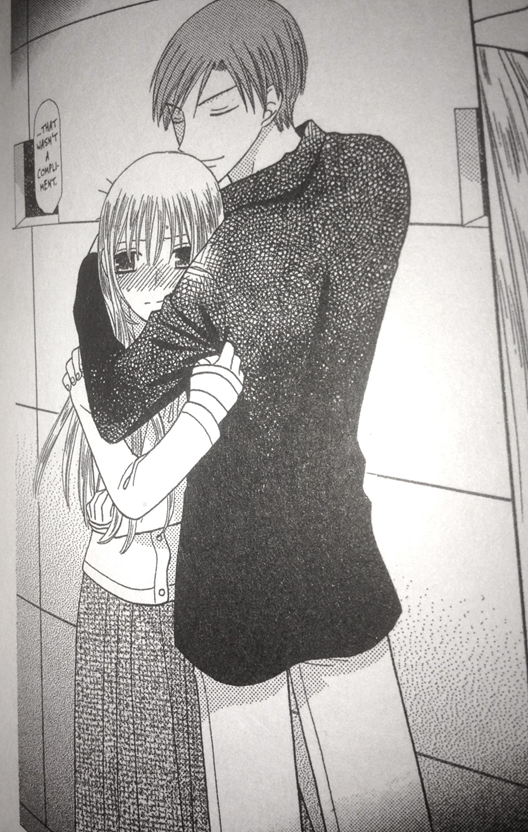 Choose me. If you still don’t believe me, then I’ll say it as many times as it takes to make you feel secure. But I don’t want my words to be wasted. So choose me, Kyoko.

It’s partly a marriage of convenience, but they really do care about each other and only need the opportunity to let that grow.  Honestly, marriage is probably the only scenario where they could allow themselves to love each other under the circumstances.

Kyoko: Katsuya, do you have a Lolita complex…?

Katsuya: Where’d you pick up that phrase? It’s your fault for being born late.

These two really are adorable. And then I remember what will happen to them…