Here we get a better view of Kyo’s personal growth by reminding us of where he’s been and showing us the dark future that’s been prepared for him.  It also shows him being completely adorable with Tohru. 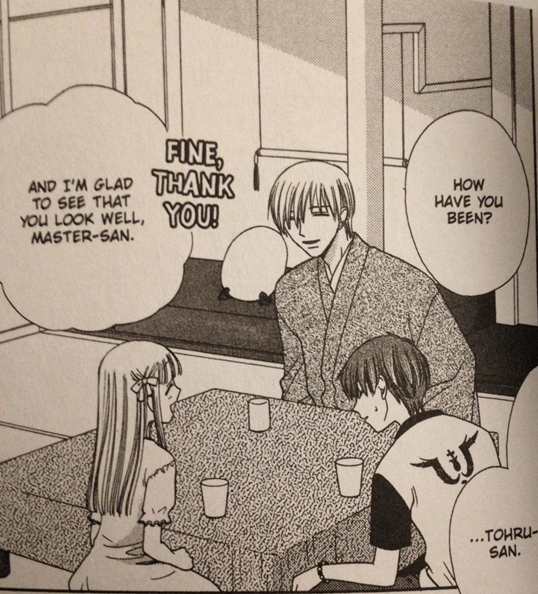 Kazuma invites the two of them to lunch at his house, but apparently forgot that he can’t even cook for himself (recall that Kyo did all his own cooking when they were living together).

Kyo: Sheesh…I don’t even know why you attempted cooking when you suck so bad at it.

Kazuma: I had a feeling it would turn out well today…

Kyo: If a “feeling” could turn you into a good cook, your kitchen wouldn’t be filled with smoke right now.

Naturally, Tohru offers to cook something for them instead, so Kyo decides to help her.

Tohru: Master-san, Kyo-kun is a good cook, isn’t he? He once made me some delicious rice porridge!

Kyo expels his master from the kitchen without further ado.  Kazuma’s obviously pleased to see how Kyo has grown closer to Tohru (or anyone new, for that matter).

Kazuma: This time last year, he wouldn’t even look up, let alone smile. He was filled with despair. He had an aura of darkness akin to death.

A call from Kyo’s (biological) father puts an even bigger damper on Kazuma’s mood, but he agrees to meet with him while Kyo and Tohru are busy cooking.  Kyo notices his subdued mood, but Kazuma dodges his questions with that old parental standby of embarrassment, reminding him of how scared he used to get as a child.

There’s nothing to be afraid of. And you won’t be afraid once you get bigger in body and mind.

Contrary to all the arbitrary age limits set by governments, “growing up” and becoming an adult isn’t something that just happens overnight.  It’s a slow shift from a belief that you’ll be in control when you’re older to an understanding that you never really will be in control.

Kyo’s Father: The one possessed by the Cat must be confined. That thing has been granted unprecedented freedom, but that will end once he graduates high school. From then on, for the rest of his life, until he dies, he’ll live in the compound in that dark room. He won’t be allowed outside, and like your grandfather, he’ll never get married…he’ll be alone for all of his days. Kazuma-dono, when the time comes, I want your cooperation. We can’t let him get away.

So this is why Kyo has trouble envisioning a future for himself: Because the Sohmas condemn the Cat to a life of isolation.

Kazuma: It seems you’re getting a bit ahead of yourself. He won’t graduate for another year –

Kyo’s Father: I’m nervous! When I think of that thing being allowed to continue living on the outside, I become a nervous wreck! He’s a monster! He’s a monster who as good as murdered his own mother…my wife! I’ll never forgive him. He killed…he killed my wife. Can you imagine how much pain I’ve had to live with? And yet – he lives on, without the slightest feeling of guilt. Why!? Why is he allowed this freedom!? It’s all that thing’s fault. Everything was ruined thanks to him. It’s his fault…and yet…

Well I wonder why Kyo blames himself for his mother’s death (and other things…).

Kazuma: You resemble him. You resemble the old Kyo, just a little bit. He had more anxiety and fear than he could handle, so he would cover his ears, shut his eyes, and project them onto other people. But that boy is changing. He’s finally emerged from despair, and has just begun walking down a new path. He’s starting to mature. Won’t you change too? Why is it you blame everything on your son, without searching your own conscience? You avoid shedding your own blood, and yet lament that you want peace.

Kyo’s Father:  Are you trying to say it’s all my fault?

Kazuma: I am merely wondering why you place all the blame on him. […] Seeing him grow up has been one of my life’s true pleasures. There is no way I would help you imprison him.

Kyo’s Father: Don’t be stupid! The Head of the Family won’t stand for this!

Kazuma: I don’t care who it is. If need be, I will protect him with my life. […] (internally) The dark aura I sensed back then exists here too. The heavy and stagnant heart. Kyo himself probably realizes the future that’s being prepared for him…I don’t want to make him go back there. I don’t want to make him stand in that darkness ever again.

Master-san is awesome. That is all. 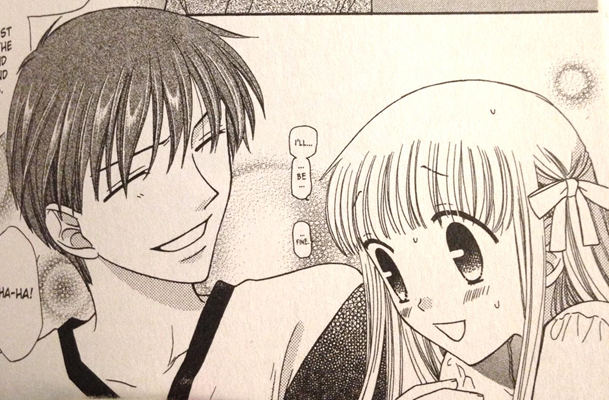 If you’re changing, I’ll protect you.

This marks the beginning of Kazuma’s increased involvement in the story, primarily by providing a safe space for Kyo (and eventually others) to develop healthy relationships.  It certainly helps that he has little fear of Akito.