Yuki is taking his first steps down his own path as the student council begins to materialize.

Kyo: What is he, a robot? That’s creepy! I’m telling you, he’s just a boring stiff.” 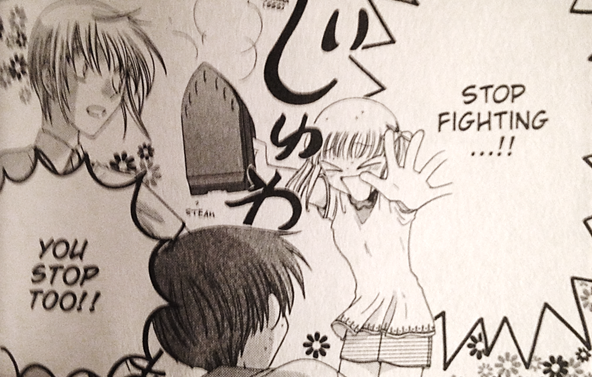 Of course them’s fightin’ words for Yuki, but they nettle him more than Kyo’s barbs are wont to – probably because he kind of believes them himself.

Yuki: Tell me something I don’t know…

Strange as it may seem to some people, it’s really easy for a model (“perfect”) student to think themselves “boring”.  When everything comes easily to you, you can start to believe it’s just plain “easy”, and thus you’re merely “normal” for finding it easy.  From there it’s not far to seeing yourself as “boring”.

Then he meets Machi Kuragi, one of the new student council members, who appears to have trashed the room.  And Kakeru Manabe, who was busy taking a nap next door.

Yuki: Somehow, this Manabe reminds me of someone. Something about him makes me feel a visceral sense of repulsion. The way his words and actions are at odds with each other, his lack of consideration for others…he’s just like [Ayame]! 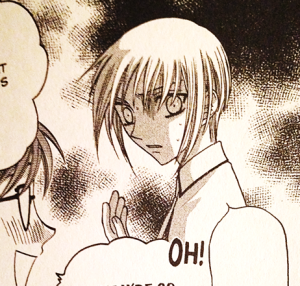 Manabe drags him along on his way out, explaining to Yuki why he even considered joining the student council.

Manabe: As president, you’re the leader, so you’ve gotta be the traditional red. Although that doesn’t really suit you. If I had to choose for you, I’d say pink’s your color, Yuki-chan. You really do have a feminine face, huh?

Yuki: (internally) This guy…he’s making fun of me! I hate his guts already! (aloud) Well, excuse me for looking like a girl!

Manabe: Huh…I’m surprised. I see, you’re actually an interesting guy! Sorry if I pissed you off. I’m an idiot at heart, so it tends to happen a lot. Don’t let that get in the way of us becoming friends! Thanks for seeing me off! Next time, let’s really sit down and talk! 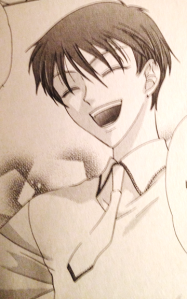 Machi is still very much an enigma at this point, but at least Manabe has already made it clear where he stands.  He is a lot like Ayame, but with the important caveat that he’s capable of apologizing when he goes too far (or at least says too much), thus placing the two of them on much more equal footing.  At any rate, he did manage to crack Yuki’s polite façade by making him angry, so that’s something.

Yuki: They’re both oddballs. I mean, on par with the Zodiac members. And as president, I have to work with them?

Yuki: Well, maybe he just meant I’m interesting to tease, but it did catch me off guard. It was the first time anyone’s ever said that to me, so I was…a little happy…I guess.

Sometimes you just need someone with a fresh perspective to see yourself in a different light.

Tohru: It might turn out to be a lot of fun. Of course, I’m sure it’ll be tough too, but if you stick with it, there will be many good times ahead of you. That’s the feeling I get anyway.

Yuki: Is that right? I’ll give it my best shot. (internally) While being hurt and saved through trivial words…

This is only the beginning of Yuki’s escapades with the student council, so he’ll be forced to interact with “normal” people at school much more regularly in the future.  The direction of this particular character arc can be a tad divisive, but being forced out of his comfort zone like this is essential for his personal development.