Tohru begins to understand the true nature of the Sohma family and their “secret”.

This chapter marks the beginning of the real story of Fruits Basket, in a sense.  It provides a small glimpse not only into Hatori’s story (we’ll get his tale in full shortly), but into the lives of all the members of the Zodiac.

Tohru (internally): I’m a little surprised [Hatori] has a picture of a woman in full view. He strikes me as a very serious person. Somehow his words all come out sounding angry.

Hatori explains that he only treats members of the Sohma family.

Hatori: Well, half my job is taking care of Akito. He specializes in getting sick. 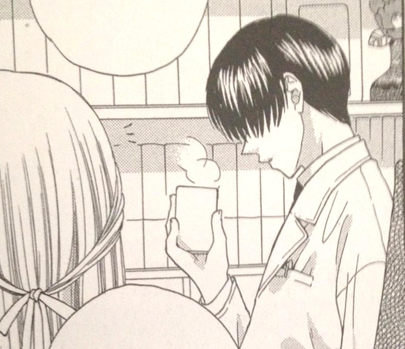 Hatori: Even among family members, very few know the secret of the Zodiac. For an absolute stranger like you to know it is unheard-of. Normally I would have employed my skill upon you immediately, but Akito didn’t give the order, even allowing you to live with them. I’ve been thinking about that myself and have arrived at an answer. […] Do you enjoy living at Shigure’s house?

Hatori: I recommend you leave that house and have nothing more to do with the Sohma family. Shigure being who he is, I’m sure he left you in the dark. You see, the Sohma family continues to be possessed by vengeful spirits. We’re not the jolly bunch you probably imagine. We are bizarre, devious, and cursed. Before you regret getting involved with this family, get out now. Akito is attempting to use you.

I’ve got to hand it this translation: Even if I take issue with some of the other translation choices, it’s really effective waiting until now to use the word “curse”.

Then Momiji gets serious, too.

Momiji: Harii can barely see out of his left eye. Harii had a sweetheart. Kana was her name. She was his assistant. Such a nice person…even when she found out Harii was possessed by a malicious spirit, she didn’t care. She laughed it off. They were even engaged to be married. But Akito was furious about it. Opposed to the marriage, he flew into a violent rage one day and nearly blinded Harii in one eye. But Harii didn’t blame Akito. Kana blamed herself. She couldn’t get over how Harii just about lost an eye because of her. Ultimately, she became emotionally ill, and so Harii wiped Kana’s memory. He couldn’t bear seeing the emotional wreck she had become. He erased all of the time they had been in love. Kana left. Harii cried…but he still didn’t blame Akito.

Momiji: Because it was the curse. You see, I don’t know what Akito is thinking either, but I understand a little of how Harii feels. He doesn’t want another woman like Kana to be involved in all this. He doesn’t want to see you get hurt like Kana was.

This is one of those chapters where I’m sorely tempted to quote every line. But there’s much to discuss!

First of all, note that this is Momiji who’s been talking all this time, the very same who was running, climbing, jumping on people, and generally being a bit of a nuisance just last chapter. Also he’s much more fluent in Japanese than you would’ve thought two chapters ago, to put it mildly.  Not only does he demonstrate great perception as far as Tohru’s feelings about her conversation with Hatori, but he also displays a pretty exceptional capacity for empathy in order to even feel compelled to relate to Hatori.

Tohru in turn is quite moved by Hatori’s kindness and thoughtfulness, because he was clearly worried about her.

And we also get this little aside from Momiji: Tohru, you’re like a mutti. You make me feel secure. In case you missed it, “mutti” is German for “mother”.  That Momiji is quite perceptive…

Shigure: Tohru, we didn’t get you involved with us in order to harm you somehow. We’re not using you. […] First of all, Hatori tends to exaggerate – with that authoritative tone. […] I keep telling you that Akito-san doesn’t bear any ill will, but you never trust me. And now you’re trying to freak out Tohru-kun? What would you have done if she really left?

Shigure laughs it all off, as always, but Tohru’s eyes have effectively been opened to the pain inherent with their “condition”.

Tohru (internally): Do they love him? Do they fear him?

“Because it was the curse.”

Tohru: Shigure-san. What is the curse? Is there something I should be doing?

Shigure: You should just be yourself.

This chapter introduces a far broader scope of emotional and thematic depth, and also begins the tradition of tragic backstories for everyone! It was actually adapted quite well for the anime (easily one of my favorite episodes), although they do cram in pertinent events from Chapter 12, which makes it redundant in some places and a tad nonsensical at one point.